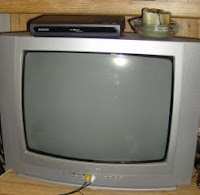 I get 15 free digital TV stations with my converter box. 2 of those are Spanish and 5 of those are variations of PBS. Often times I end up watching children's shows when nothing else is on. I must admit I am a big fan of Word Girl.

Not all of the stations come in at the same time. Right now channel 9 and 13 won't come in. If I move the converter box around I might be able to get a picture but I'm not that motivated at the moment.

Every so often I get a new channel. A few weeks ago realized that the music video channel is not Spanish as I had thought. It comes in so rarely I didn't know. Last weekend I found a new channel, 11.2, which plays obscure movies from the 80's as far as I can tell. It doesn't tell me the names of the movies like the other stations do and I can't find the TV listings online. The station is called THIS. Last weekend I watched the beginning of a movie with Betty White and Leslie Neilson as the main characters. Tonight I caught the end of a movie with Rob Lowe and Andrew McCarthy and now it is a movie about the Kennedy family.

With so few channels to choose from this new channel is a welcome change. Not that I have a lot of time to sit and watch TV anyway. But when I do sit down it is more fun if there is something entertaining to watch.
Posted by Daizy at 8:00 PM

We get This as well. They used to tell you what was playing, but now they don't. Most of the movies seem to be pretty obscure like you said. Every once in a while something good.

They always seem to show the lesser known sequel to a movie but hardly ever the first movie. Things like RoboCop 2. Who knew they even made that?

The listings are online here:

We have the This channel here too. I think it has more movies from the 70s than the 80s. Although the two movies I have watched on it were 80s movies (Night of the Comet and Child's Play.) I might occasionally watch it if I knew what movies were coming on. Now that I have Netflix I don't watch much live TV anyway.

Well, if you all get it maybe it is big enough to stick around. I like that it plays movies all day (as far as I have noticed) and doesn't turn in to infomercials for half the day like the other channels. I'll have to check out the schedule.

They had War Games on not too long ago. Not as good as I remember, but pretty good. They show a lot of the Clint Eastwood westerns. And they are big on themes. All Elvis movies one day. James Bond stuff the next. War movies on Memorial Day, etc.

You have cable a little like mine. I had them install only Basic cable 13 years ago to improve my failing reception. But the cable guy did not have the box needed to screen out the channels I was not paying for. (The box belonged in the junction box room in my apartment building, the room with the electric meters, etc., not in my apartment.)

Anyway, I made sure the cable guy wrote that down on the work order (I still have it) so the cable provider would not come after me for theft of services. The cable guy never returned.

Over the years, our local cable systems have reorganized the cable channels. Each time, I ended up with extra channels at no charge. None of them are premium channels but that's okay.

Only in the last 2 years has this trend reversed, as some of the channels have gone to HD which needs its own converter box. I don't plan to get one because that will expose the great deal ($15 a month) I have been getting all these years. I still have about 25 of the 50 freebie channels I used to have including many but not all of my favorites.

Over the Cubicle, War Games was one of my favorite movies as a kid. I taped it off TV and watched it over and over. I saw it again last year and it was sooo bad.

Dave, I bet you get better channels than I do. Mine isn't cable, it's antenna with the converter box. I only get the networks, PBS and weird variations on network sub-stations. I had basic cable at my last RV park and those were good stations like TBS and WGN.