The dog trainer cancelled on me again. Last week it was because of the rainy weather. This time she was sick. That gave me all afternoon to tackle my plumbing. I wanted to work on it again because getting water to my mobile home is taking too long. I stopped at the hardware store and spent another $50 on supplies. I told the clerk what I was doing and he put together an assortment of plumbing pieces. I wanted to buy a mixing valve for the hot and cold water of the shower but they don't sell them separately. The kit was $40. I told the clerk that it didn't need to be pretty so he told me I could do the same thing with simple on/off valves and pipe. He also introduced me to a product that I didn't know about called Sharkbite. They are three times as much as plastic connectors but the best part is that they come apart if I mess up. That could have saved me a lot of money and time if I had used them from the beginning. 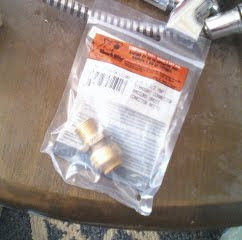 While I was trying to glue the pipe for the shower's hot water, I spilled the whole can of purple primer. What a lovely Mardi Gras purple.


This picture is dark because I took it with my camera phone but you get the idea. Of course I will have to put something waterproof on the walls. I haven't gotten to that point yet. When I turned the water on I had 2 small leaks but was able to tighten them until they stopped. 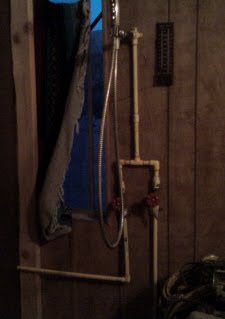 I was actually able to wash my hands in the sink! Ok, so I still had to catch the water in a bucket underneath but at least I have running water. Next step...drains.
Posted by Daizy at 8:03 PM

At least it was just the primer and not the glue too!

You are almost there!

Ya, the glue is a lovely orange color. I could not believe I did that. Must have been the fumes making me dizzy.

I am glad it is dye, first glance looked like bruising, or worse, doggie biting.
Lizzie

Lizzie, at least it washed off in a day. No one noticed at work.