Three weeks to go!  Even less if you consider that the last day of school is on a Thursday.  My nephew made a comment that we will have to go back to the mobile home for the first week of school because he won't have his license yet.  Whaaaat???  Did I miscalculate?  I asked him to look at his driving permit to see if it had a date.  It did, January 20th.  School starts July 22nd.  Since he has to wait 6 months after getting his permit, that gives him 2 days to pass his test.  If he doesn't pass the first time then I will probably just drive him to school for a week until he can try again.  I think he would be able to ride the bus but it would be a bit late to notify the school district that we need bus service.  Oh well, we will deal with that if needed.  I am optimistic that he will pass.

Last Friday, I took the day off.  Sassy went to the vet for her Valley Fever test.  Her results came back today and, unfortunately, her numbers are even higher than last time even though she is not limping at all.  The vet recommended changing pharmacies for her pills since the vet has noticed a decline in potency of the medicine they supply.  So, I ordered through a different pharmacy and changed to capsules instead of tablets.  Hopefully, the medicine will work this time.  After that, I headed over to my nephew's school to help judge the senior career projects.  They were all very interesting and I learned a lot of great tips for my nephew's senior project next year.  The best presenter brought in her clarinet and played for us.  Another girl brought in glass pendants from her time learning about glass blowing.    The other students had photos in a powerpoint presentation but bringing items for the judges to see made it so much more interesting.

On Saturday, I thought I was going to tackle some yard clean up but first priority was getting the evaporative cooler started and it wasn't as easy as I had hoped.  My nephew and I went on the roof and took the metal panels off. 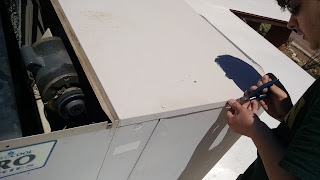 I poked around and finally figured out how to turn it on, plug in the hose, turn the water on, etc.  The only problem was that the water was not getting to the cooler pads and it wouldn't send out cool air.  After many frustrating trips up and down the roof and watching how-to videos, I was still stumped.  I decided to write a desperate email to my old HVAC repairman.  He replied by the next morning which surprised me because he isn't even working in the HVAC business anymore because of bad knees.  He told me that I need to make sure the two pumps are plugged in to the correct outlets.  I never would have figured that out.  I didn't see any markings anywhere.  Anyway, so after we spend a nice afternoon with my mother for Mother's Day, I went back up on the roof and switched the plugs.

Voila!  Cool air!  I was so happy!  Now I really should go back up there and do a better job of cleaning out the hard water deposits but it is supposed to get to 100F this week and, now that it is working, the priority has gone down.  I'll be sure to clean it up well when I shut it down in the fall.  I saved $75 by doing it myself which makes up for the expensive Mother's Day lunch we had by mistake (note to self, look at prices BEFORE going in to a fancy restaurant.)

This week is normal.  On Saturday, I get my 40 pounds of chicken and then next week is super-busy.  I'll just try to take it one day at a time as usual.
Posted by Daizy at 7:45 PM

May 12, 2016. Please accept my belated best birthday wishes, Daizy, for yesterday, I never miss reading your blog. Yours is one American dream: you’re fiercely independent, handywoman par excellence, animal lover, family-oriented, surrogate parent to a nephew who likes to sing. Please continue to keep us in a state of exhaustion and have a wonderful year ahead. Philo

Thank you, Philo. That was sweet of you to say. My 44th year should be quite challenging. The months are filling up with activities already even though I try my best to get some precious nap time in!