Off to the Faire

Weekends are so short!  Last Friday, I arrived at the mobile home, as usual, puttered around a little bit, cleaning and pulling some weeds and just decompressing after a long week.  Then we loaded up the car with dogs, suitcases, and food and drove 30 minutes to the house in town.  I can't even remember if I made anything for dinner.  I was thinking about cooking some fish sticks but the lack of ketchup in the house made me put it off.

The next morning, the dogs were up at 6am but I convinced them to let me sleep until 8.  After feeding them I cooked some eggs and bacon...mmmm...bacon.  My nephew isn't a bacon fan.  More for me and the dogs.  The dogs are definitely bacon fans.  After breakfast we got in the car and headed north to the Renaissance Faire.  Now, I had been warned that it was an hour and 45 minute drive and I had drawn myself a map.  My nephew was driving and I was the navigator.  2 hours later, I realized that we were way off course.  I had missed the turn off.  We turned around in a tiny town called Mammoth and I bought a map at the gas station, for future use.  3 1/2 hours later, we found the Renaissance Faire.  I was happy that we finally found it even though I would have rather been at home.

First stop, stand in line for the bathrooms.  Next stop, buy some questionable food.  I wish I had seen the pizza before I bought the flauta platter.  It was chicken and green chilies inside a flour tortilla rolled in panko bread crumbs and deep fried.  The bread crumbs were overkill.  Next stop was the wooden sword shop which drew my nephew in like a magnet.  He didn't find the right style so we wandered to the next wooden sword shop.  Still no luck so we wandered some more.  It was my goal (and his, sort of) to find a show that he could watch and review for his school assignment.  Finally, I saw one starting in 15 minutes so we walked some more and came back for the show.  It was a musical group called Ghazaal Beledi with fire-eating belly dancers.  Definitely not boring. 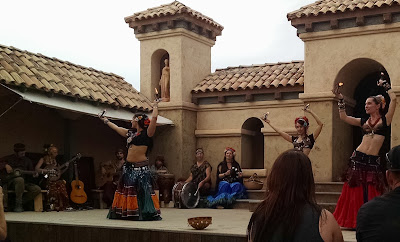 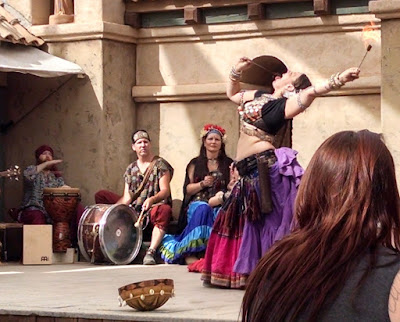 After that, I was ready to leave but my nephew still wanted the perfect sword.  He found out where the other sword-makers were located and mulled over his choices, and mulled, and mulled.  He finally pick out a painted sword for $35 but I convinced him that it would be better to buy an unpainted sword for $20 and paint it himself with my many cans of spray paint.  He agreed. 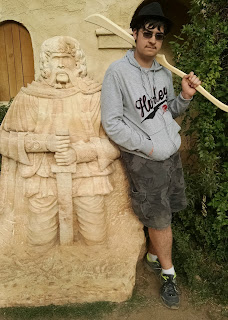 I drove home and it took us 2 hours and 15 minutes with one quick stop for gas.  I was so happy to be home and out of the car.  It was a good experience compared to my nephew being inside playing computer games all day but I missed my Saturday to relax.  Oh well, maybe next Saturday.

and the dogs didnt even get to go!
Looks like fun was had

Looks like a fun time you had there. Were you one of those belly dancers? :p

I know. They might not have enjoyed 5 1/2 hours in the car or crowds. Maybe next time.

Haha, no but I learned that they have a belly dancing school in Phoenix. If I signed up, maybe I could be up there on stage next year!