My Weekend with Shelves, Lamps and Gravel

Once again, the weekend flew by.  It was my goal to order more red rock for the front yard but it didn't work out.  When I arrived at the store, I found out that the decorative rock is sold next door and they don't have Saturday hours.  I ended up buying half of a cubic yard of grey gravel and they dumped it in to the back of my truck.  While waiting for the gravel loader, my nephew called because he was bored and wanted to know when I was sending him the wii.  Since I was half way to the used bookstore, I stopped in to look for used wii games.  They didn't have the ones he suggested, Lego Harry Potter or Lego Star Wars, so I bought him a Super Mario Brothers game.  Hopefully, it will amuse him.  I packed the wii and all of the accessories into a big box and I have to ship it out tomorrow.

But back to the gravel,  I also stopped at the thrift store and found this shelf, which is probably a shoe rack for $10.  I sprayed it down with lysol.  I think it is a good temporary fix to my lack of cabinet problem. 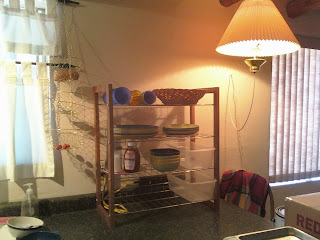 The lamp in the picture was also a project for this weekend.  It was a stand lamp but I wanted a hanging lamp and I could not find one at the thrift store or Home Depot.  I guess hanging lamps aren't in fashion like they were in the 70's and 80's.  I decapitated my stand lamp and hung it but the cord would not come out of the stand. 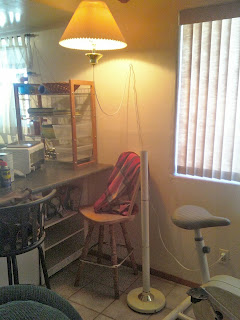 I had to cut the cord, pull it out and buy a replacement plug at the hardware store.  Luckily, the store clerk was able to show me how to take the replacement plug apart, wrap the wires from the cord around the screws, put it back together and it worked!  I now have a hanging lamp and a stand that I can't think of a use for.  Any ideas?

Once the temperature started to cool off in the evening, I trimmed back the oleanders, removed some big rocks and I was able to open my RV gate all the way.  I backed my truck up and shoveled all of the gravel out.  My truck is very dirty now.  I was considering having 6 cubic yards of gravel delivered to my driveway but then I would have to cart it back either by bucket or by rented wheel barrow (wheel barrows are expensive!).  That would take a very long time and block my driveway so I have decided to do this 1/2 cu.yd. at a time with my truck so that I can at least unload it in to the back yard.  I also need to remove the weeds and figure out the exact placement of my garden and flower beds so slower is better, even if it takes me 2 years.  I would have taken a picture of the 10'x10' area that I have completed so far but it was dark by the time I stopped working tonight.  I wish I had a month to work on it but my weekend is over already.  Only 5 more days until my next weekend!
Posted by Daizy at 9:26 PM

I just bought some gravel in Vancouver recently. It can be pretty expensive, but it's really transformed my backyard.

I agree. Adding rock doesn't sound that exciting but it is sure better than dirt!