Whew...we have passed a major hurdle. The car has been purchased. My parents are now able to roam freely about town and do all those things they want to do like buy milk and potting soil. 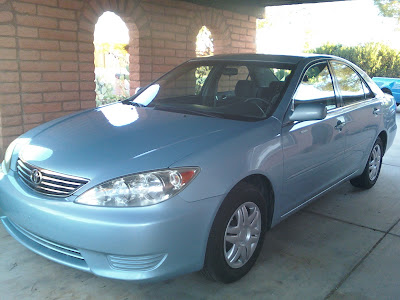 The only thing that I had planned to do today was to go look at a Buick Century that was for sale by owner. I went over at lunch and the guy let me take the car home so my parents could see it. The car ran well but it had a lot of little things wrong with it like broken speaker covers, broken window controls, cracked windshield and old tires. My mom was not impressed so we decided that I would return the car and drop them off at the dealership that they wanted to visit. At first I was going to go back to work and let them take a taxi home but I thought I would stick around because I didn't think the dealership had many cars in their price range and then I wanted to take them to another dealership.

Well, my mom test drove a Chevy Cavalier and it was Ok. Next she tried a Toyota Camry and she said she would buy it! I couldn't believe it because I thought she would want to try out more cars plus it was more money than we had discussed but she wanted it so she bought it.

It is a very nice car and everyone I talk to says it was a good deal. I am very happy that my parents can get out and do things while I am at work. I did not like them trying to walk to the store for milk in the heat. Now I just have to teach my mom the main roads around town so that she can find her way. What good is great gas mileage if the gas gets burned up going in circles?
Posted by Daizy at 9:14 PM

Nice for them to have some freedom and at least you can relax a little now.

Camry is a good car. Probably a superior choice to a Chevy.

Yes except they don't have insurance yet so it is still parked.

Nice to hear you really taking care of your parents needs. Kudos. Yes, nice reliable car. I bought 1995 one and gave it to my Mom and bought another in 2005. They are good deals, you don't end up replacing things after a few years. The 1995 is still going strong, very nice v6. Anyhow, nice car.