I went to the house for the home inspection and was greeted by a broken window and a downed tree limb in the yard. The window was on the side of the house that faces the neighbor. We all assumed the rocks came from them. I hope that doesn't happen often. I would like to be on friendly terms with my neighbors. 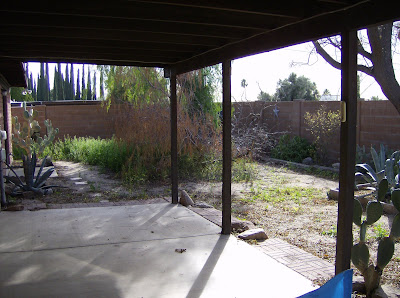 The yard will require some clean up before it is ready for dogs. I would also like to take out the 2 China Berry trees. I have read that they are poisonous to dogs and they sure are messy. It will be expensive though.
The house didn't have any major issues except that the inspector couldn't get the heater and cooler to come on. I will have to call an HVAC company to send someone out as soon as possible. Hopefully it is nothing too complicated to get them working. The inspector did say that the furnace is very old and won't last much longer. I might be back to space heaters sooner than I expected. I do plan to upgrade to a combination heat/AC heat pump but I hear they cost $4k-$5k and I don't have that yet.
Other than that, the other items were minor ranging from an oven light that didn't turn on (probably the bulb) to a recommendation that I upgrade the breaker panel which would cost around $800. The inspector did a great job and I can use the list to fix things as I get the money. I'm just a little disappointed that remodeling the kitchen is going to have to take a back seat for a long time and I will have to prioritize my goals. Do I want to save money to build a house on my property or do I want to remodel the kitchen? I think that will depend on how well I like living there. If I don't like it there I certainly won't care about the kitchen.
I did find more storage spaces than I thought so that was fun. 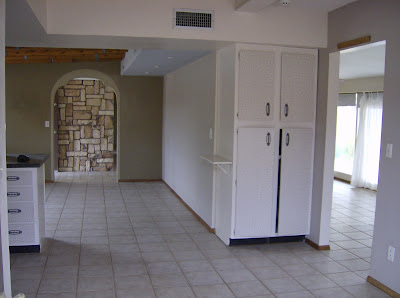 I found a small pantry in the nook area, two closets in the hall, and a little workshop outside with a bench and shelves. I'm still excited about the house but the reality of the cost of home ownership is sinking in. I mean, my last house was brand new so it didn't need anything. This house was built in 1975 and there have been a few unprofessional alterations, nothing major, just additional lights and things that aren't quite up to code.
Next step...more inspections and the appraisal. Things are finally moving forward.
Posted by Daizy at 7:29 PM

I've been following your blog for a long time...congrats on the house! You're getting a great deal on it. If I may I would like to throw my two cents in: Get a home warranty, it has been invaluable to us over the years. It has paid for things like a/c/heater repairs (multiple times), new garage door opener and springs, new water heater, plumbing issues, bringing wiring/electrical up to code, new main breaker, and a myriad of other little things. We used it the most the first year, probably got about $1000 worth of repairs for only $400. If something breaks beyond repair, it will (supposed to) replace it. The downside: they don't cover "known" pre-existing issues (although I think they will definitely pay to bring things to code). Just something for you to consider. Again, Congrats!

I think it is great. I like the actual house but also the opportunity that you have. It will be fun. Dont do anything eltrcial or gas (do you guys have mains gas?) yourself but otherwise go for it. Maybe the kitchen re-model can just invoel a load of paint at first?
Lizzie

CONGRATS!
Dont be sad about the neighbours.
Make sure you go up and introduce yourself to them . It really helped when we moved in 6 yrs ago.We found out lots of stuff about our house and who not to trust on the street.

I know it is hard to move slowly when you just want to fix it up now.
Really any landscaping should wait a yr.............unless it is dangerous.
And if you can handle it...paint what you can t change now white (think of it as an undercoat) then when you are flush with cash, go nuts!
I am so excited for you!
barb

What a lovely house and so much space! Good luck with it all . From Jules In the Uk ( living in a very small house)

Corrie, my realtor and the inspector were discussing home warranties and everyone had only good things to say so if I have the money I will get one.

Lizzie, as long as it's functional I can survive. I noticed that the cabinet doors have a funky crackle paint finish. I suppose I will learn to appreciate it.

Barb, I am just amazed at all the little things that need attention. I suppose most can be ignored for a while. I should print out my 40 page inspection report and then prioritize the items and check them off one by one. Hopefully I will have a little money left over for fun stuff.

Jules, there's a lot to be said for small houses, like cheaper repairs. I've never lived in a house this big on my own. It kind of feels wasteful. I suppose the dogs will help me fill it up though.