A Piece Of Cake 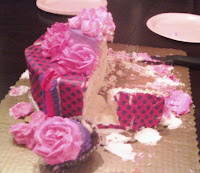 I survived the baby shower. It was a bit awkward since I didn't know many of the guests but the time went fairly quickly and the expectant mother seemed to enjoy herself. I was the only one who bought diapers. I thought they were a very practical gift.
The cake actually tasted quite good. It was covered in printed frosting sheets instead of fondant (which often tastes nasty). There were chocolate cupcakes around it too. It makes me want to decorate a cake again...although seeing it cut up and eaten after all that work is kind of disheartening.

I returned the dog that I was trying out in my house to see if I could watch him next week. Sadly, no. One of my dogs did not like him and they fought a couple of times. The last fight was pretty vicious so I had to say I couldn't watch him. I told her I could be a back-up but I would have to rotate that dog and my mean dog from crate to dog run so that they were never together. I still have to work most of next week so I will be gone for 10 hours a day which makes it harder. I don't want one dog to be stuck in a crate for 10 hours. I don't think there is much chance that she will need a back-up though.
I'm cooking chicken now for all of my lunches this week. I need to go grocery shopping but I know I can make it with what I have for this week. I think it will be nachos and spaghetti on the lunch menu.
Posted by Daizy at 7:26 PM

I don't believe your furry little friends would let you have time or peace & quiet enough to make cakes. Or do I have a business idea coming on 'doggy birthday cakes'. Yeah!

I have heard of doggie birthday cakes. I don't know if the economy would support that idea around here. Maybe a part time job. No cake baking facilities at the moment though. Someday I will have a real oven again.