Yes, that's right. It's a new dog. One of our foster homes decided to stop fostering and he had around 15 dogs so they were begging for people to make room for one or two. One lady took four chihuahuas but then she already had over twenty dogs so what's four more? 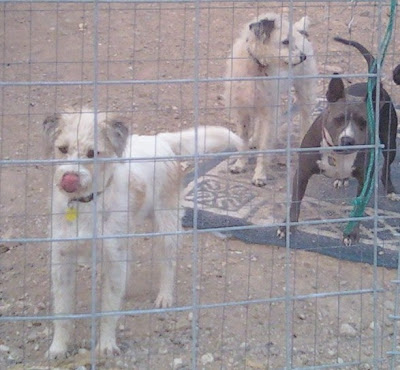 He looks a lot like the terrier that I already have except scruffier. He will go to the groomer later this week and hopefully they will make him look handsome for the adoption event on Saturday. 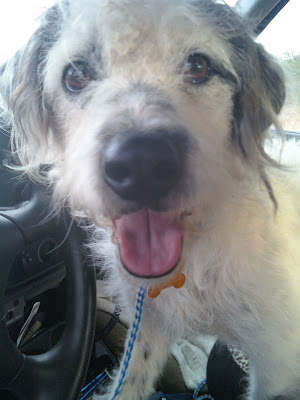 I took my little dog to work today. He did very well and didn't bark or growl at anyone. There were only 3 other people there so I knew it would be a calm day in the office.

It rained all day and was cold. Not northern cold, just around 50 but it felt colder because it was wet. I had to take my trash cans and recycling to the road when I got home and I was very cold and wet by the time I got back home.
I hope I am collecting a lot of water in my tanks. I moved water around on Sunday so one tank was half full and the other was only 1/5th full. I couldn't see the tanks tonight because it was dark by the time I got to the mobile home. If I get to buy the house I am waiting for then I won't need the water but I'd like to have a reserve just in case I am here for another 5 months waiting for an answer from the bank.
Posted by Daizy at 8:02 PM

Just what you need, another mouth to feed but it surely must keep the mobile home warm. Thats a whole lot of dogs to rehome in one go. Once you have your 'dog ranch' are you planning to up the numbers a bit too? You can;t have twnety on the bed with you for sure.

I've been getting a lot of free dog food, just got another bag last week. I don't think I will ever make it to dog ranch status. Unless I suddenly had a lot of money and could hire help. I don't want to get burned out like that last foster and have to re-home them all in a weekend.