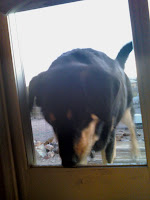 Yesterday was our company Christmas dinner. I am notoriously late for it every year and last night was no exception. After spending the day at a dog adoption event and taking my dog to get his rabies vaccine, I tried to get home early so I could get ready. I didn't make it early though because people were late picking up their dogs and I stayed to help make sure everything was packed up and clean.
I thought I had enough time but by the time I got home and unloaded the dogs and the truck it was getting late. Then I had planned to color my hair and take a shower. Coloring quickly went out the window and I plugged in the water heater for a shower but that too had to be postponed. I decided for a quick spritzing of the hair and a pony tail.
Then it was time to get dressed. I remembered from the year before that black pants were out of the question because of all the dog hair in my truck. I tried on a dress but only had Summer sandals that matched. Luckily, I found a pair of grey pants that looked ok with the velvet jacket I had bought specifically for the holidays this year. By the time I was ready to go I only had 20 minutes before it started. I had estimated 45 minutes for the drive because the boss' wife likes to choose a restaurant on her side of town. Of course, that is where most of the good restaurants are anyway, not that I ever go to them.
Over an hour later I finally arrived after winding through traffic and hitting every red light possible. I was 45 minutes late and everyone had ordered their dinner already. I already knew I wanted filet minon so I ordered right away. I had a nice time talking with the people on my end of the table about dogs and Tucson and things to do because the people had just recently moved to town. Dinner was very good although everyone's steak was over cooked. That was ok with me because I said I wanted it medium rare but actually I meant medium. The portions were not huge so no doggy bag (sorry doggies). We were finished with our meal by 10 and then I had an hour drive back home so I got to bed at 11pm. I'm glad we only do that once a year.
Oh and another reason for being late to dinner, I posted on Facebook that I wanted a sliding glass door dog door insert and one of my friends just happened to know someone who was selling one for only $35. She even brought it to the adoption event for me. I was thrilled and had to try it out as soon as I got home. Most of my dogs don't like it. It is magnetic and it makes scary clacking noises when the flap moves. Two of my dogs have gotten the hang of it so hopefully they will show the others that it is not a scary thing. This will definitely help lower my electric bill since before I was just leaving the door open with a thick blanket over it. I don't even want to think about all that air conditioning that went out the door last Summer.
Posted by Daizy at 7:17 PM

No pitcures of you in your dazzling outfit? :(

I never attended any company holiday events in all my 23 years of working so I can't relate.

Fillet mignon and doggie doors. Doesnt get much better than that. I too have nothing to wear to the Christmas party but not to worry as even more disasterosly I have double booked it with our trip to france. Oh well, next year.

No time for a picture beforehand and well, I felt less than dazzling at 11pm. Usually we take a group picture but no one did this time.

Filet Mignon in France would be quite nice too!