One Thing After Another

I was right, it finally rained today. I attached one dog door flap and then decided to take a nap. I woke up to thunder and thought I had better get up and put flaps on the other 2 dog doors. By the time I got my shoes on the wind was wailing and the skies opened up. The water started pouring in the dog doors. I grabbed some towels to block them off and then noticed that the water was coming in around the air conditioners. The water leaking in the bedroom pooled on the countertop and then trickled over the edge and got the bathroom rug all soggy. When I had blocked all the leaks with towels I looked out the window and saw that my 500 gallon water tank had blown over. I ran outside in the rain and saw that the faucet had broken off when it fell. I had to run back inside to get the pliers and then back out. By then I was completely drenched. I managed to get the broken piece of pipe off and remembered that I had a piece with a shut off valve in the garage. So off to the garage and I try to get the door open. It was really hard but I finally got it open. The water had washed away the bottom of the termite damaged corner post and lots of dirt and mud had washed in. I found the valve and screwed it on and dragged the tank back on to the platform. It took a lot of trial and error to get the pipe in the right position under the gutter. By the time I was finished the rain had slowed down and there was some blue sky. The other tank collected around 250 gallons. That means I missed out on 250 gallons. Oh well, I'm sure it will rain again, hopefully not as violently. 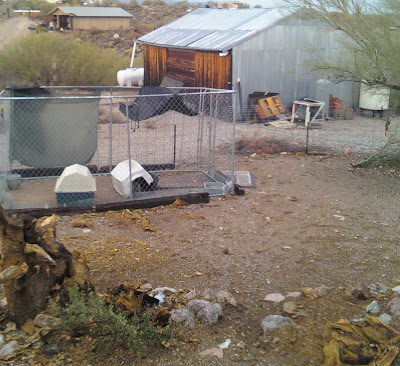 After I dried off and changed my clothes I started to clean up the mess. Just yesterday I had all of my laundry done. Now I have a big bag of wet, dirty towels. I found a leak in the roof too. It is where the chimney used to be. I don't know when I will have a chance to fix it. I should at least put a trash bag on the floor to protect it. That corned doesn't have any linoleum, it is just particle board. The dog run had been moved a foot. The shade cloth was torn off. A big branch broke off of the tree. 3 of the dog houses were over turned and broken apart. The jacuzzi cover was blown off. My to-do list just got a whole lot longer. I need another 3 day weekend.
Posted by Daizy at 9:07 PM

Jeez Daizy, you can't get a break when it rains, something you usually look forward to, living in the Arizona desert! :(

Nice relaxing weekend you had there then.

I know Dave, I was afraid this would happen. The last 2 years have been very mild. If these storms continue like the last 2 days, I'm not going to have a mobile home or garage left to worry about.

Lizzie, it was great up until the flooding. I'll be lucky if this mobile home survives the Summer.