By 4:30 everyone else was gone so I decided to leave too. When I got to the door I saw that it was pouring rain and the parking lot had a nice river going down the middle. Unfortunately, I parked on the opposite side so I waited until the rain slowed and then attempted to jump the river and got my shoes all wet. 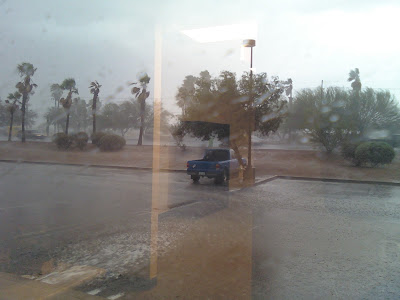 A few miles down the freeway I saw a brown cloud. Brown clouds are very bad but I forged ahead. Then it hit. It was raining so hard I could barely see the car's tail lights in front of me. Lots of people pulled off to the side to wait out the storm but I decided that moving 5 miles an hour was better as long as I could still see the road because I would come out on the other side of the storm faster. A few miles later the rain stopped and the storm had passed, or at least, I had driven out of it.

When I got to my road there were cars on either side of the wash. (For the non-desert people, a 'wash' is a normally dry creek or river bed that suddenly turns in to a raging torrent when it rains. Our wash was flowing and there is once again, a giant crater on one side. One car went through and made it. Another went through. And I went through. This is only the second day of rain. One more day and that road isn't going to be passable. It washes out every 5 years or so. I think this is going to be the year.

When I got home I found a flooded mobile home again. I had underestimated the amount of water that was coming in through the roof. The bucket that I had placed below wasn't quite in the right spot. My particle board floor and particle board entertainment center are acting as sponges right now. I soaked up the rest of the water with more towels and then had to go do a load of laundry so that they would get dry again in preparation for the next flood. Tomorrow morning I am going to try to get up early and go up on the roof to see if I can quickly patch the hole. I am also going to put the big 30 gallon trash can under the leak. Hopefully that will catch any water. I don't think my floor can take much more water damage.

Oh, and I guess the dogs were bored because they decided to re-decorate while I was gone. 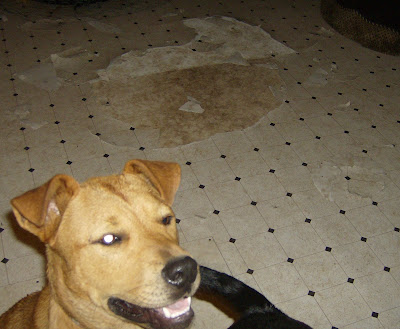 Between the water damage and the dog damage, I don't know if this mobile home is going to last the Summer. Oh and I didn't collect any rainwater because both pipes fell away from the gutter. This monsoon season is not going as great as I had planned.
Posted by Daizy at 9:07 PM

I haven't been on or posted in a while ...so just want to check in and say I havn't forgotten about your blog ...did you h=get you rental paid off ( i need to do more reading to see...we paid ours off and then did a refi because h=we had such a large equity loan on it at least our rate is fixed now. our plan is to start making big payments again and get it paid off in 5 or so years ... LaDawn

Hang in there, Daizy! Just think how far you have already come. There are always bound to be rough spots. Better to have weather/material issues than health issues!

Yes LaDawn, I did pay it off but now I am kinda lost trying to decide what to do next. I think another loan is in my future.

So true Jo Ann. I couldn't do any of this without my health. I am very thankful for that!