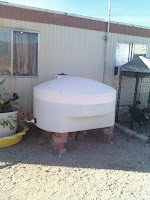 A coworker got some phone numbers for me for water delivery because her friends get water delivered. They said they get 1,000 gallons for $25. I was sooo excited. I called the first one, no answer, left a message. I called their cell number and someone with a heavy accent answered. At first she said yes, they could do it but when I told her where I live she said "Forget it!". Ok, so I know English isn't her first language but she almost made me cry. I am so desperate for water right now and she won't even drive 20 minutes to my house. I would even pay double or triple.

The second company got me the same results. She recommended calling the people I had just called. I was so disappointed. The last place I called is a larger company in town. They will deliver for $120. Wow, that's a lot but I thinking about it. I should only need one delivery before I can get my own $2,000 water tap from the water company. It will rain in a month too so that will give me more time. The problem is that the water that I have now is starting to smell bad and no amount of bleach is fixing the problem. It is ok to shower in but I don't like the dogs drinking it. Of course dogs will drink just about any old water but still I don't want to make them sick.
I could also fill up 5 gallons of water at the store's machine down the street. This would be an annoying chore every day especially in this heat but it would only cost me $1 a day. Our Summer rains have a good chance of starting within the next 4 weeks so that would be $28.
Maybe I will start buying 5 gallons a day and if it is just unbearable hot I will get a delivery.
Posted by Daizy at 8:05 PM

AFAIK dogs can drink just about anything without getting sick. You'd be in trouble with the smelly water if you had horses, wouldn't you?

I would go with daily water collection. Does the £2000 for a tap mean that you could actually be on the mains soon?

Well KoBold, they certainly don't seem to mind. Smells like pond water to me. I suppose I could buy a filter for the faucet. I should look in to that. I've never had horses. I can't imagine how much water horses drink. I would definitely need my own well for horses.

Lizzie, collecting water will definitely give me a work out. No need to join a gym! No, the water line is not getting closer any time soon since the building has stopped. We had hoped that it would come near us when we heard they were planning a subdivision of houses nearby but that all stopped. The water tanks are about 3 miles away and that is where the tap would be.