I took advantage of being off of work while most other people were working and took my truck in for the required emissions testing. There was a confused woman in a mini van in front of me and she stopped in the middle of the road and put her hazard lights on. Then as I was passing her, rolled down her window and was yelling things at me. I assumed she didn't know where the entrance was to the emissions testing place so I slowed and pointed ahead of me. I couldn't hear her because I have manual windows so I couldn't roll the passenger window down. I was hoping she would follow me but in my rear view mirror I saw her turn in to the exit and as I was waiting in line she was walking in to the office. A few minutes later she drove around and got in line 6 cars behind. At least she finally figured it out. The test only took 5 minutes and my truck in good for another 2 years. That's a relief.

After that I stopped at the thrift store because I think it has almost been a year since I have been near the thrift store when it is open and when I don't have a dog in the car. I spent an hour sifting through the clothes. I found a few shirts for work which is great because my wardrobe has become so boring. At least when I have something nice to wear I am a little bit excited to get up and get dressed for work. 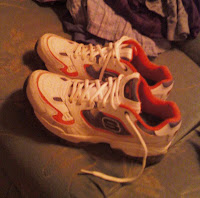 Next stop was Ross where I found some walking shoes with big treads for my rocky road. The women's section had flat treads except for one pair of golf shoes. I went to the men's section and found this pair of Sketchers on clearance for $18. Hopefully they will last longer than the hiking shoes I got last year. At least they are a more well known brand name. I bought them a half size bigger and re-used the gel insole from my last pair. I took the dogs for a walk when I got home and there was no sipping and sliding down the road. I also bought some socks to replace my holey ones. New shoes, new socks, new shirts. It was like a mini shopping spree today.
Posted by Daizy at 10:28 PM

Sounds like a fun day. I have some lovely Caterpillar boots, bought for one of the kids for hiking but he soon out grew them. But they are so heavy I end up never wearing them. Shopping fail.

I have some old boots from my last job but they have steel toes and are really heavy too. I think they would give me blisters. Don't know why I still have them. They should go in the donation box.