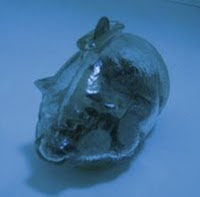 Yesterday I was complaining about how unfulfilling my job is. Today my boss called me. He has been in Asia for a week so I haven't heard from him in a while. I was very surprised when he told me that I will see a 4% raise in my salary starting next paycheck. Wow. I don't think I have ever received a raise that big. I estimate it will be almost $100 more a month after deductions. I'll know for sure when I get my next paycheck.

As much as I dislike my job at times, especially the boring times and the frustrating times, I can't complain about the money. It isn't amazing money but it is a respectable $41k which isn't bad for AZ and my low cost lifestyle. The money won't keep me there forever but it certainly makes it a little easier to stay. Perhaps the money is keeping me from taking a risk that could make me happier and wealthier. Or perhaps the money is keeping me from making a big mistake like quitting too early and losing everything. I don't know.

For now I will just take it one week at a time and enjoy adding $100 in to my budget. First it will go towards debts and then home improvements. Yay!
Posted by Daizy at 9:23 PM

We got a 2% pay rise this but national insurance went up by 1% so ended up with an increase of £1 a day. Last April we had no increase but pension contributions went up though so actually had a £100 a month reduction. This year doesnt look so bad compared with that!
As you say the biggest problem is that it makes it harder to leave and do something you might like better.

And it looks like you already have the added money spent, whether it is on debts or home improvements.

The good raises I got in the 1980s and 1990s (when raises were actually big) helped me to be able to reduce my hours and work part-time because once I became debt-free in 1998 I only needed $41k part-time to cover my expenses and still have $$ left over.

It certainly was a nice surprise since 2 years ago they reduced our wages and last year they gave us a one month bonus instead of a raise. Things look like they are getting back to normal.

Zoinks, if I wasn't planning on working somewhere for much longer a 1 month bonus is 8.5% versus a 4% raise. But a raise is (theoretically) permanent versus a bonus which may not be given the next year so if you are looking to stay there a couple more years the raise might be better.

But I do think you need to be very careful about taking the step to your next job/career/life phase. Have a plan B and if possible a plan C and D if things don't work like you expect them to when you do take that step.