This is the second hole that my lovely foster dog made in the dog run yesterday. Isn't she talented? She can unwind that chain link ever so gently to make the perfect dog size hole. 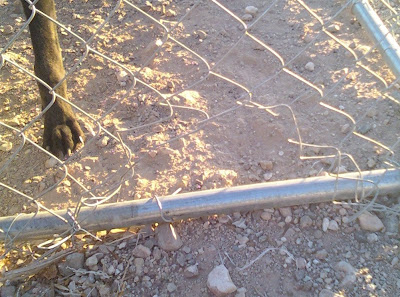 Last night I though of an idea to cover the bottom of the chain link with smaller holed wire mesh. I found some at Home Depot but it was $45 for 25ft. and I would have to cut it in half to get enough to cover the whole perimeter. I asked the customer service guy where the wire was because I wanted some with a larger diameter than I had been using. He took me to the masonry section (I would have looked in the picture hanging section) and we found some strong wire for much cheaper than the flimsy wire I had been buying. Then we happened to pass some soffit mesh. It was 6 inches tall and only $10 for 25ft. I put the expensive mesh back and picked up 2 rolls of soffit mesh. 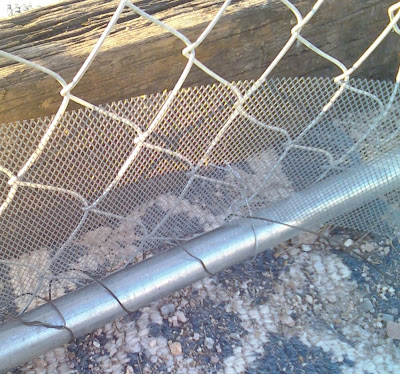 After a couple of failed attempts at attaching it to the chain link, I had the bright idea to prop the whole kennel up on bricks so that I could wind the wire around the bottom of the kennel. This is how I was supposed to attach the chain link from the beginning but couldn't figure out how it was done. I still haven't figured out how people do it with only one long strand of wire. Perhaps they just carefully pull it through so that it doesn't get kinked but that would take a very long time. 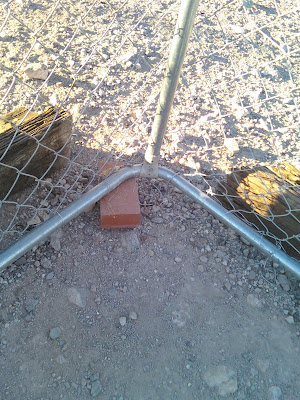 Anyway, I only got one side attached at the bottom. It is going to take a long time to finish attaching the mesh and I don't have that much free time right now. I might just put my hyper dog in the kennel alone since she won't escape (she didn't get adopted today). The other chain link destroying dog is ok in the house as long as the other dog is not with her because then they are too rambunctious together. I don't want to deal with escaping dogs again this week.

After getting lost this morning, I found the place that was selling the railroad ties. I couldn't lift the big ones (as one commenter predicted) but I was able to lift (or rather, drag) some smaller ones and pieces. They were in the free pile so they didn't cost me anything. 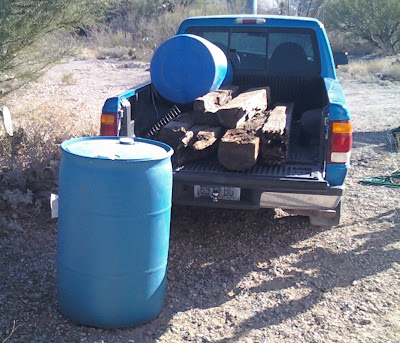 The guy was also selling barrels so I bought 2 for $15 each. My trash cans that hold my laundry water has started to leak. I bought a new expensive trash can last week but these barrels will be better because unlike the trash cans, they are designed to hold liquid. The only problem is that I thought the lids came off and they do not. I'll have to cut them off with a saw. I don't think I have a saw that will do that so it's another project for my to-do list...like that list isn't long enough already.

I laid out the railroad ties and they almost fit around the dog kennel. They aren't as sturdy as I would have liked (because I couldn't lift the good ones) but they were free so I can't complain. I think that I will wire them to the side of the kennel instead of trying to staple/nail them. 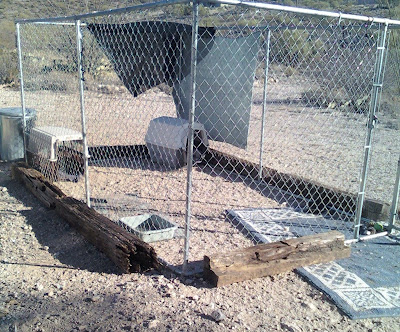 I am optimistic that my improvements will keep my dog contained but I can't test it out until it's all done.

While I was at Home Depot I stopped by the flooring department and asked about tile and carpet installation. Tile costs $1 a sq/ft plus $3 per sq/ft for labor. Then there is grout, thinset, and very expensive carpet removal. The estimate came to $4,400. Ouch. And there is a 3 week waiting list for installation. Carpet was a much better deal. Installation is $129 and they can start 3 days from payment. Carpet is $1 a sq/ft plus the pad and old carpet removal. If I need to get the 3 bedrooms re-carpeted then it would cost $850. I am hoping the bedrooms don't need new carpet but I won't know until tomorrow or Monday when I get in the house.

A friend told me that she has put in laminate wood flooring in her homes and it holds up well. I searched for it on the internet and the only concern, besides deep scratches, is water damage. I wouldn't want to put it in the kitchen. But the fact that the living room, kitchen and dining room are all one big room makes me a little worried about people eating in front of the tv and spilling drinks. I don't know. I have heard people say that tile chips as well so I guess there is no fool proof flooring. I'll have to keep researching.
Posted by Daizy at 9:27 PM

Thanks for the update. My prayers are with you.

She is clever, pity she doesnt work for you instead of against you, you could do with the help.
I didnt understand what railway ties were, i pictured something like metal things for attaching stuff to the ground. These, railway sleepers we call them, make more sense.
I have wood laminate and ceramic tiles downstairs. The wood laminate is really good and the marks that it acquired over time just make it look better. It is okay for the odd glass of spilt drink etc but not much good in bathroom and kitchen area even if you have the special type. My laminate is really thick wood so you could actually sand it down if something really bad happened to it. I have ceramic tiles in the kitchen. Looks brilliant and is easy to clean but will chip if you drop something heavy and sharp. We cracked a few during the installation but since the base is set properly no more problems.
I would go for wood through and ceramic near water but make sure everything is really thick, maybe from an industrial supplier, to make it tenant proof.
Good luck
Lizzie

Thanks for the recommendations Lizzie. I am hearing good things about laminate and I am hoping it won't be as expensive as tile. I should go back to the store and look at it. I've never actually looked at the stuff.

Ties, sleepers... my synonym is cross-tie.
As for wiring chainlink to fence: I can think of two more methods. One is securing each segment of chainlink separately with a piece of wire. The other is using two wires like a sewing machine: one makes loops that go through the chainlink, the other goes through the loops of the first one, securing it. I reckon I should make a sketch.