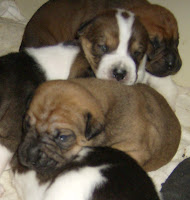 Last night I was trying to think of a way to keep my dogs from escaping their dog run when all of a sudden it dawned on me, put a muzzle on the offender! My boxer/pit mix is the one who is unlacing the chainlink so I put a muzzle on her and sent them both out again today. I was nervous as I drove home. Was I going to find them running around in the desert again? No! They were both trapped inside their dog run although I could see that she had done her best to get out despite the muzzle. The hole was back but it was only big enough for their heads.

Tomorrow I will put the muzzle on her again and I moved one of the dog houses in front of the corner where she likes to make the hole and wired it there so it can't be moved. Hopefully she won't start a hole somewhere else.

I am still researching fencing material. I decided the quickest and simplest idea was to buy chainlink fence panels and attach them to the stakes that I already have in the ground. I measured the perimeter and found that I would need fifteen 6'x6' panels. At $60 a panel that's $900. Hmmm...maybe the dogs will get adopted this weekend and I can put off this fence project for a little while longer.

And see the picture above? The puppies opened their eyes! They are funny looking. The brown ones have wrinkly Sharpei faces and the spotted ones do not. It will be interesting to see what they grow up to be.
Posted by Daizy at 9:03 PM

One suggestion I have heard of is to dig a trench down 6 to 12 inches then bury the chain link fence in the trench. The theory is that the dogs will get discouraged if they dig a little and don't make progress. But some dogs are determined diggers. I had a pit bull mix that would dig entire underground caves...never could figure out how to get her to stop.

Another suggestion (worked for my digger) is to place cayenne pepper around the edge of the fence. I wouldn't do it if the puppies are around.

Robert, I am trying not to dig because the ground here is so hard but I don't think I am going to be able to get around it.

Anonymous, that would be interesting to see if "painting" the chainlink with pepper would slow her down.

I never thought of painting the fence with pepper, I just put it on the ground under the fence.

I never thought of painting the fence with pepper, I just put it on the ground under the fence.