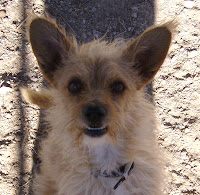 How can my weekend be over already? Saturday was wasted with a headache and today was all for the dogs.

I got up early and arranged to bring a dog to someone who wanted to adopt him. I dropped him off and everyone was happy. I took 3 other dogs to an adoption event across town and chatted with my fellow dog people. I was having trouble getting on the wireless network so I waited a while and tried a few things.

Finally, after erasing my temporary internet files, I was able to get on. I opened my email and there were 3 emails from the lady who just adopted my dog. That couldn't be a good thing. I opened the first and it was a nice email thanking me for going out of my way to bring the dog over. The next email said that the dog had escaped the yard 5 times, despite their attempts to barricade him in. The next email said they wanted to return him. Oh great. I told them I could come by after the adoption event. The next email said that they had to leave for a meeting but they left their son at the house in case the dog comes back...COMES BACK??? The dog was still missing from the last time he escaped.

I packed up my stuff and headed over there with another friend. On my way I got a call from someone who saw my dog in the park but couldn't grab him. Evidently they were able to get my phone number off his tag but then he ran off. I was hoping he would still be at the park but he wasn't. We drove and walked around for over an hour and put up lost dog signs. After the sun went down we decided to call off the search. We were parked at the park and I looked in my side mirror and saw a little animal near the stop sign a block away. It was my dog! He was right next to the Lost Dog sign. My friend ran over and I was close behind. There were 2 cars in the road but luckily they waited for him to cross.

At first he wouldn't come near but then he recognised me and came to me. I was so relieved! I was sure he would have been killed if he had stayed out all night. He is back home with me. He needs a home where he can stay indoors all day. He will have to go back to spending his days in a crate at my house until I can find that perfect home for him.

I got home after dark again. My neighbor offered to let me do my laundry at her house but so far I haven't found the time. Maybe they will let us off work early on Thursday and I can get some laundry done. There is another chance of rain this week too. Maybe I'll be able to do my own washing soon.
Posted by Daizy at 8:49 PM

is that the same dog you had to set the trap for because he ran away as soon as you got him to your house?

When it all gets too much just think about how many little lives you have already saved. Puts some perspective on it.
Lizzie

He is so freaking cute, the little escape artist!

What kind of fence did they have or did they have one at all? Is he just a chain link climber or can he climb cinder block too? And did you see how tall the wall was if there was a wall?

Anonymous, no this is another dog. He is the first fence climber I have had. He just wants to be with me all the time and when I leave he escapes and goes looking for me.

Lizzie, before the dogs I was just watching tv on the weekends. This is much more interesting...or crazy...I'm not sure which.

Petunia, he is cute. Little do they know the mischief that hides inside!

Brigette, they had a 5 foot block wall but I suspect there were things he could climb or jump up on to get over it. He is a very high jumper. They didn't understand that he needs to bond with them before being let out in the yard. I am sure he was looking for me.

Oh!! I am so glad you found him. Sounds like another goldy chase. Hahaha

flower girl, at least it had a better ending than Goldie. Poor Goldie had to have $2,000 surgery to repair some internal damage from when she was hit by that car.