Hanging Out With Oktoberfest Dogs 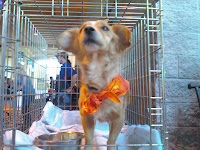 I spent the afternoon at our local Oktoberfest today. I can't really tell you much about it because I had 2 dogs in the dog adoption area the whole time. I did manage to sneak out for a snow cone, which I am guessing, is not German. It was supposed to be Hawaiian shave-ice but it just seemed like a regular snow cone to me. That was disappointing. I suppose next time I should only buy food with a picture menu so I know what to expect. 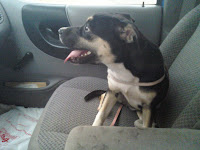 My dogs did not get adopted but they did get lots of attention and the little guy in the orange neckerchief got a few phone numbers of possible adoptive people. I have been babysitting him but he went back home with his original foster mom because I got another one out of the pound. She is a 6 month puppy and full of energy. Once she is over her kennel cough I hope she gets adopted quickly. Puppies get adopted fast. One of the rescues today had 12 puppies and I think they all got adopted by the end of the day.

It was sad to see the ones that got put down at the pound last night, especially since I had just been there yesterday. Some had been my second and third choices but I don't have room for all of them. And of course, the new rescue list came out and I want them too. Maybe one day I will have the facilities for a real animal rescue out here. It is definitely something I will consider when the mortgage is gone.
Posted by Daizy at 8:30 PM

O, your dogs are soooo cute! I wish I could be there to help you.

Well flower girl, next year foster dog camp at my place! That brown one was a cutie. So soft, like a bunny, and only 10 pounds. He just wanted to be held. My new one is a 5m puppy. She just wants to be held too but she is 26 pounds! Quite a difference.

O stop, I just want to hug the brown one! Everyone has small dogs here! There is one and his nane is radar he is so cute!!