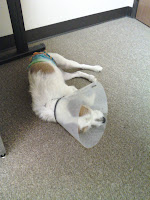 This is my sad foster dog with a cone on his head so that he doesn't lick his incision. He moped around the office all day. My boss did not believe that he is two years old because he barely moved but my boss didn't see when I took the cone off and took him outside for a walk. He was instantly a happy energetic dog. Too bad I had to put the cone back on. I am going to take him to work with me for the rest of the week and then he should be all better. I think being able to take dogs to work is the best perk of my job. It is risky though. Dogs can be disruptive and messy. I have been lucky so far.

I should take him to an adoption event this weekend but I am kind of burnt out on them. 4 in the last 2 weekends was a lot. I want a weekend to myself for once. The laundry isn't going to wash itself.

The wasps are still lingering outside my RV. The temperature is going down to 55 at night but I guess that isn't quite cold enough to drive them away. Tomorrow it is supposed to rain. Maybe that will lower the temperature. I would really like to be able to walk in front of my RV again without fear of angering them. As soon as they are gone I am going to plug the hole and remove the second nest. Hopefully they won't come back next year.
Posted by Daizy at 6:52 PM

The whole 'dog to work' thing is pretty good. I cant imagine my bosses face if we brought dogs to work. Does this mean you are staying in the same job just a little bit longer??

How do you want to plug the wasp hole? Caul gun? 2 component "putty" epoxy?

Lizzie, I will stay until I find something better. I'm always looking.

KoBold, tube of caulk. I broke my caulk gun by forgetting to break the seal on the caulk and squeezing too hard. Now I just use the tubes.