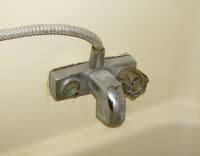 My tub faucet has been leaking. Then the hot water handle broke. It would turn the water on but would spin when I turned it off so that it would not shut off tight. I have been getting around it by keeping the water pump turned off, which I do anyway, but this time I would shut it off right away because water was steadily leaking out of the faucet.

I attempted to remove the plastic handle today and found out that the screw head was stripped. I took the cold water handle off just to make sure I knew what I was doing and then I drilled holes in the plastic handle on the hot water side all the way around the bad screw. Finally it cracked and came off. Then I could get at the screw with pliers and some lubricant and managed to get it out.

I looked up a replacement faucet on the Camping World website and it costs $40. The shower attachment costs extra. I found another RV parts store and they sell just the plastic handle for $11. The store was near where I was going anyway so I stopped by today. I think the place has closed. The hours said is would be open but there was no one around and all of the gates were locked. Oh well. Guess I have to go to expensive Camping World after all and hope they sell just the handles too.

I didn't have a chance to get the new faucet handle because I had a dog in the car. But I didn't put the screw back in to the cold water side so I can adjust both sides by taking the handle off and putting it on the other side. It works for now. Not a long term fix but at least I'm not losing gallons of water every time I turn the pump on.
Posted by Daizy at 8:19 PM

You should check your favorite home improvement store. I bet you can find a much better quality one there. Just because you have the trailer does not mean you have to go back to trailer dealers.

My dad put a regular kitchen faucet in his camper after the orginal had problems. Even the cheap one at a home improvment store will seem like better quality than then camper stores. Plus then you have standard components to replace in the future.

I have not checked myself but a friend said that when she tried to find a bath tub faucet and sink faucet at the regular store she could only find one for the sink. They didn't have any tub faucets with the shower connector. Have you seen one? I would love to not have to buy an expensive "cheap" RV faucet.