Death To The Squeaky Ball

The poor back-up squeaky ball barely got a chance to shine. My dog killed it tonight and then pulled it's feet off piece by piece. (yes, it was a ball with feet) 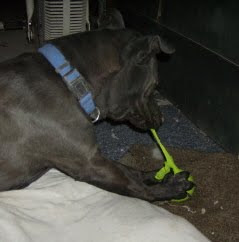 I should have known, I read the reviews and the people said their dogs bit the feet off. It was made by the same company, JW Pet, as the red ball that lasted for 2 weeks, I thought it would have a chance, even without feet. My dog crushed the squeaker and it fell inside the ball. It still makes an interesting rattle but not as interesting as a squeak. It think I will stick to red balls now. I hope the next one lasts at least 2 weeks. I can't afford an $8 a day squeaky ball habit for my dog. I did find them on Ebay for $5.50 plus shipping but still, that's too much. I never thought I would have a problem finding sturdy dog toys. They also make a giggle ball that I want to try. Maybe the noise maker is not so easy to destroy. We never had toys for our cats when we were young. They were outside cats though so they had the whole world to amuse them. I am learning so much from being a dog owner. For one thing, it's expensive!
Posted by Daizy at 8:19 PM

That is one determined looking pup!

Hope it appreciates all of those toys.

I suppose you could call it appreciation. Not exactly the most affectionate dog. Someone suggested that maybe she hates squeaky things, that's why she makes them stop squeaking. I don't think so, she has that gleam in her eye when she's torturing it. :)