I was able to call the mobile RV repairman today. He will be out first thing tomorrow morning. If it is the blower motor then that is bad because I will have to wait until Monday or Tuesday for a replacement. I hope it is something else.

I also broke my watch today. I pried off the back to change the battery and now I can't get the back to stay on. I have it stuck on with tape right now. It is a relatively cheap Walmart watch but I would rather not have to buy a new one. I wonder if I could replace the battery, then super glue the back on. That would give me another year before the battery wore out. 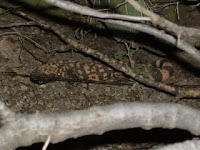 When I got home today I heard a dog barking in my wash. (For those who don't know, a 'wash' is a dry creek bed.) I took my puppies for a walk and came back. The dog was still barking. I locked up the puppies, got some dog treats and went to investigate. I found the big neighbor dog nose to nose with a very big and very poisonous Gila Monster. The dog came over to me to say hi and then went back to tormenting the lizard. I tried to get him to come with me but he wouldn't and I was afraid that he was going to get bitten so I went to the neighbor's house to let them know. Wouldn't you know it, by the time we got back there the Gila Monster was gone and the dog was up by my kennel making the puppies bark. I felt silly for bothering the neighbors. It would have been better if the Gila Monster was still there so the neighbor could see it. She had never seen one in our area. That is the third one I have seen since I have lived here. I'm glad they are still around. I'd much rather see a Gila Monster than a rattle snake.
Posted by Daizy at 7:58 PM

I have never seen a Gila Monster. Rattlesnake either for that matter.