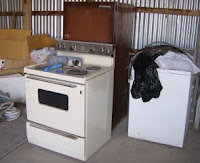 Today at lunch my coworkers and I were discussing trash. I brought it up because I don't have trash service and it costs $10 to go to the dump so I am trying to find alternative ways to get rid of my refuse. I only generate one bag a week so keeping it around until I have enough for a $10 trip would take a while. We were also talking about old appliances since one coworker recently took some to the dump and I wanted to make sure they were still accepted without charge.

Our boss happened to be eating lunch with us and he made an innocent comment. He said,"You know they take the old appliance away for free when they bring the new one out." Poor guy. He didn't realize that he was talking to the frugalites of the office. Four people answered back at the same time..."Well, some people can't afford new appliances...Some people have to buy used...Some people are pinching pennies...etc, etc". It was quite amusing.

It's just one of the many things that people with money and means take for granted like water and trash service! By the way, he did say that it was ok to drop a trash bag or two in the back dumpster every so often. Maybe I have found my alternative to the dump!
Posted by Daizy at 7:04 PM

Today's new appliances are generally more energy-efficient than used appliances that are more than a few years old.

A lot of people could save money in the long run by buying and installing one or more new energy-efficient appliances.