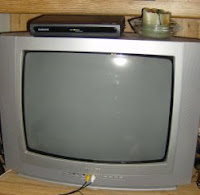 Armed with my government issued $40 converter box coupons, I drove 35 minutes to a far-away Walmart that had boxes in stock. There were 2 brands to choose from, Magnavox and RCA. Both were $50. I liked the Magnavox design better and obviously, so did most other people because there were only 2 left while there was still a stack of RCA boxes. There was also a notice telling people how to get their $40 coupons which was nice of them. The woman in electronics even asked me if I had my coupons already because she wanted to be sure I was getting the discount.

I should have paid for the items in the electronics department because when I got to the front the cashier had no idea how to ring up my coupons. She called someone over who said, "Gee, I don't know, I was off when they had that training". Luckily, the third person they asked had some idea and they were able to scan the coupons through like credit cards, then I had to sign for each one. The people behind me in line were getting a little agitated.

I brought my boxes home (I have 2, one for both TV's) and found that the enclosed push-on, box to TV connector, did not work on my TV. My TV likes the screw on cables. I found an old screw on cable and was able to get it working. There was an easy automatic setup screen that scanned for channels. Now instead of 6 channels, I get 11! I never knew that PBS had 4 channels playing at once. Ok, one is in Spanish but the others were a surprise. Now if I want to watch preschool shows like Teletubbies at night, I can! The picture is clearer, no more antenna fuzz but 2 of my channels just went out. They started breaking up in to those digital squares and then it said no signal. That's just great. So now if I want to watch then I have to switch back to analog antenna reception. I hope they get those problems worked out before next February.
Posted by Daizy at 7:15 PM