I can do laundry!!! Ok, I'm a little excited about it. My boss came over this morning and I showed him where I wanted the dryer hooked up. Since the garage is kind of far from the RV we talked about moving the washer and dryer up to the mobile home so that it would be closer and indoors. Doing that would involve more wiring, plumbing and trips to the store than I wanted to do this weekend so I was happy to get it hooked up in the garage for now. 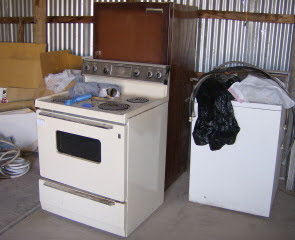 We moved the old appliances out of the way(for a later trip to the dump), swept the floor, connected the outlet and moved the washer and dryer in to place. Even though changing out the outlet was an easy switch I was glad he did it because he had the electrical tester to see if the wires were hot. Also, there were only 3 wires for a 4 wire plug and they were marked black, red and green. I would have been confused. Turns out the green one was neutral. I guess the person that put it in didn't have any white tape to mark it.

After we tested the washer and dryer to make sure they turned on, I showed him all of the other things that needed to be fixed. We decided that moving the water pump to the garage and the washer and dryer to the mobile home would be the next project but I told him that if my house doesn't get rented out in March I will move back there until I do find a renter. In that case, the washer/dryer project will get put on hold. I hope I find a renter though. I don't want to move again.

After he left, I transferred as much water as I could out of my collection tanks and in to my holding tanks. I found out that my RV tank holds 75 gallons. I think I could get buy for a month on 75 gallons if I conserved. I put more water in to the jacuzzi too. I have never been so low on water that I had to use jacuzzi water but I like to have it just in case. There are 3 or 4 months where the rainfall is rare and those months are approaching fast so I want to have as much water saved as possible. 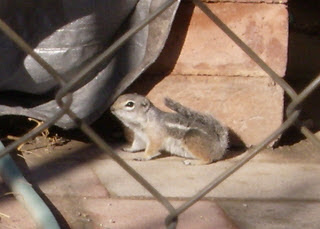 I thought all of the squirrels were sleeping now but this little guy seemed to like my greenhouse a lot.

Next I decided to attempt a load of laundry. First I found a trash can to collect the water as it drains. Then I carried three buckets full of water to the washing machine to rinse it out because it has been sitting in the garage for a year. The water didn't look dirty so I thought I would just dump in my clothes and some soap. I was going to do 2 loads but I didn't want to go through the whole process twice so I put in all of my clothes. Of course then I had to add more water. 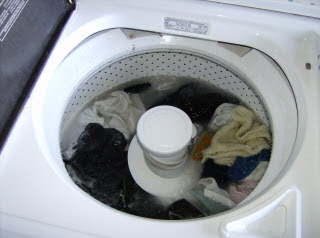 It took me a while to figure out where the agitate setting was on the washer but eventually I found it and my clothes were happily being washed. 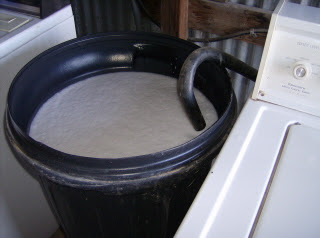 When they spun and the water drained, it nearly filled my trash can so I had to find another trash can to catch the rinse water. 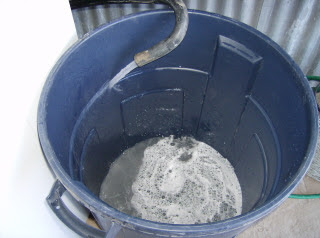 I think that I will use the wash water to water my plants and the rinse water to wash the next load. If that works well I won't have to use as much water each time. I estimate that I used 18-20 gallons total. If I only do laundry once a week and recycle half of the water for the next load I think I can spare the water. I can actually get away with only doing laundry every 2 weeks. I have to do a bigger load but I think it will use less water. 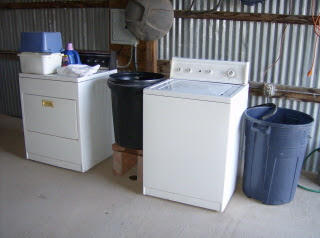 This is the final set up. After all of the hauling and watching and catching for the washing machine, drying the clothes was so very nice and easy. Just put them in and set the timer. I feel civilized again. 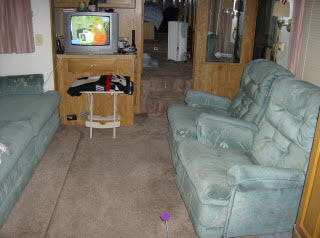 Oh look, my chairs in my RV are clear of clutter! I cheated though. I stuffed all of the bags in to the closets. I didn't want my boss to think I was a slob.
Posted by Daizy at 6:23 PM