Hello to my friends in internet-land!

I want to check-in to let you know that I am alive and well.  I hope you are all too. It's been almost a year since I posted last. The world sort of imploded since then. Here are some highlights and lowlights of the past year:
A LOT of puzzles have been done.  My neighbor and I work on them every night. 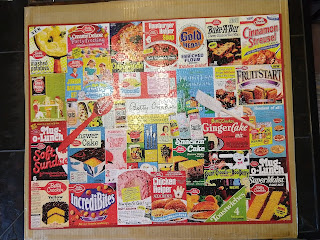 Let's rewind. I was living out at my tiny house and my Canadian friends were renting my house back in March 2020. When everything started shutting down because of the pandemic, they decided to go home.  Too bad.  The weather was lovely and golf courses never closed but they would lose their health coverage if they stayed once the borders shut. I moved back to my house.
The animal shelter thrift store that I was volunteering at closed until June.  I brainstormed how to help without being so hands-on (I was previously collecting the donated goods) and asked if I could help list items on eBay.  I didn't even know they had an active eBay site.  They had one person listing a few things as she had time.  She was happy for the help and we started bringing in over $1,000 net a month for the animals.  My house also started filling with eBay stuff and shipping supplies. This was a cat collection from one lady. Most of it has sold. 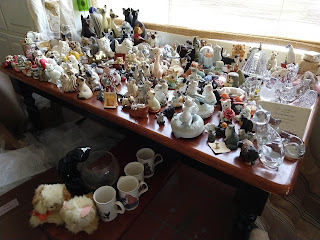 My big dog Baloo left us in June.  I tried to keep him mobile and happy for as long as I could. He was 14 (I think) and in the end he had dementia. It was very sad and we miss him.  Well, I miss him.  My little dogs probably don't. 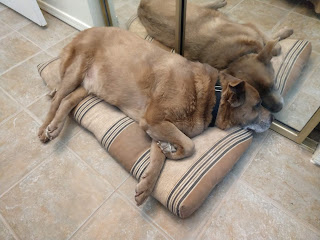 I got a new dog in July. It wasn't planned but I saw her on our county animal shelter's website and recognized her as belonging to my previous tenant.  You might remember the homeless man who stayed in my 2 bedroom rental house for a few months while I was having a fence and driveway added. I made an appointment to meet her and she was a mess.  They told me that her owner had a stroke and was hospitalized and she was left alone.  A neighbor broke in and caught her.  She bit him as well as the other shelter workers. She had been in the shelter for a month on hold, to see if her owner could come and get her and also for her bite-hold. I was willing to take her on so they put her directly into a crate after she was spayed and had her teeth cleaned. I took her home and let her relax. I waited 3 months before arranging a haircut. She survived it and so did the groomer. She lost some weight and we are taking short walks now.  They told me she was around 9 years old. She fits right in with my old crew. That's her on the right. 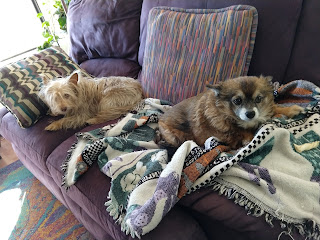 Work has been very busy. Although some business dropped off because of the pandemic, my job wasn't affected much. I've reworked my early retirement calendar and 2-3 years is still looking do-able. I added in paying my sister for her half of the house based on the current real estate prices.  That way I am aiming high.  Health insurance for early retirement is still a question mark. I haven't researched it lately because policies change too quickly.
My nephew who is living in my mobile home next to my tiny house lost his dish-washing job.  He did eventually qualify for pandemic relief so he has money but he misses his job and his friends there. Hopefully he will get hired back this summer.
I haven't done anything to my tiny house. I was just arranging to hire someone to insulate and put in drywall last March but I put all that on hold.  I did clean off the porch a bit more than this and store things in the shed so that they wouldn't get ruined.

This snowbird season I rented out my house for 4 months, December to end of March. Here is a picture of the shower stall improvements I tried to do until I have enough money for tile.  I spray painted the chrome handles and door and added the stick-on tiles. My neighbor offered to let me stay in her guest room and move all of my eBay stuff to her garage. I couldn't pass up a generous offer like that (plus hot showers, running water, sidewalks) so that is where I am now with my 3 dogs, her 1 dog, and my 5 quail outside in their cage. 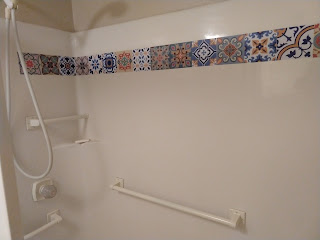 Oh, I didn't mention my quail. My elderly quail eventually died and I wasn't going to replace them but then the pandemic hit and the egg shortage and I got more quail. 5 that get along and 1 who is a different color and gets picked on so it is in a separate cage. 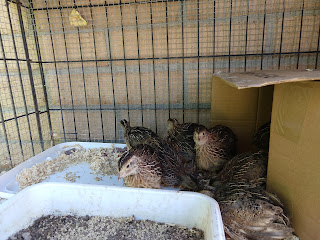 Hi Daisy,
So happy to hear from you! I often wonder how you are doing! You are my hero! Keep on making your life be what you want it to be!

I love all your ingenuity. It always gives me ideas too. So many changes for everyone right now. I am sorry about the loss of your big old guy. It sounds like you stepped in as truly the best option on your prior tenant's dog. Have a great year, Sam

Ah, Daizy, I am so happy to hear from you again. I'm still reading about your activities these past few months and catching up on your life. Thank you.

OMG Daizy, I am so glad to see you again, my dear! I had stopped checking out your blog on a regular basis a few months ago. Good to see you are still caring for your Augie Doggies. I didn't know you had quails, too. Just reading about how busy you are wears me out LOL!

Sorry to learn your early retirement plans have gotten delayed, though. You seemed to be very close to achieving that coveted goal. How are the prices for individual policies through the ACA's exchange (state-run or federal-run)? Arizona has expanded Medicaid coverage in case you qualify for that based on your would-be retirement income. Even without that, you would likely receive a nice premium subsidy through the program.

Daizy, it's me again. I was waiting for a comment from your longtime reader, Dave. He arrived, so the gang's (almost) all here.
Again, I am happy that you are back in blogmode.
Best

I’m a longtime reader but sporadic commenter. So glad to see your post — I’d been wondering how you were doing.