I had a post written for last week but my mother took a turn for the worse and my priorities changed.  She hadn't opened her eyes when I visited for two weeks prior.  She was sliding down in her wheelchair despite our attempts to keep her supported.  Her 79th birthday was last Tuesday and the hospice nurse called me to say that my mother wasn't eating but was still drinking protein shakes.  I visited her after work and she ate some birthday cake.  On Thursday, the nurse called again to say that she wasn't able to eat or keep liquids down and was in a lot of pain.  She said the end was near and she recommended liquid morphine which I approved.  When I arrived a few hours later she was still in a lot of pain and they said that the order for morphine had to be called in, filled, and delivered.  It wasn't there yet.  I waited for two hours stroking her hair until the drug finally arrived and she could sleep.  You would think that hospice would be able to keep a small amount on hand for such occasions.  For the next few days, I watched mom slide closer and closer to death.  Finally, I got a call at 4:30am on Tuesday that she was gone. 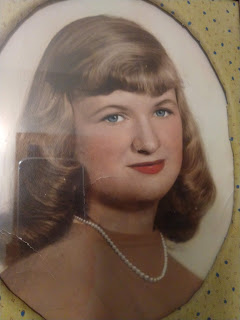 It's been a long, terrible journey with vascular dementia, a type of dementia I didn't know had a name a year ago.  I am glad she is finally free of pain.  I took the week off to get things organized and just take a break.  The funeral won't be until next month when everyone is available.  I'm trying to decide how long I want to stay in this house.  My sister will transfer the title into both of our names in order for me to stay if I want to since she is over 55, as this community requires one person to be over 55.  I have some time to decide.
Posted by Daizy at 11:03 AM

I am sorry for your loss. It is so hard to watch someone leave. I hope you can find some time to take care of yourself in the days ahead.

I’m so sorry, Daizy. You were a wonderful caregiver and daughter to her. Thinking of you and your family.

Very sorry to hear about your Mom's passing, Daizy. Hugs to you.

Dear Daizy, In the long run, when you and your mother decided to live together, you gave each other much joy in the midst of the dailiness of life. Thanks to you, she had so much support and loving care in her last days. I am very sorry.

I've been following your blog for years. I'm so very sorry for your loss.

Daizy, So sorry about losing your mom. You always give a lot to your family and I'm sure your mom appreciated it. I hope you have a chance to relax a bit.

Daizy, so sorry to hear the news. You sacrificed a lot to make your mom's final few years as good as possible. Considering all the time and effort you put out to make the house good for living (for you and your mom), I hope you decide to remain there.

I am so sorry for your loss. Hugs for your entire family. You are in my thoughts and prayers.

I have also been following your blog for years. I am so sorry for your loss. Your Mom and Dad must have been so proud of you; they must have been so pleased to have raised a daughter with such a strong work ethic and a devotion to family.

I am so sorry to hear of your loss. Your mother always seemed so healthy, I was surprised about the dementia. I think you should take your time to make any decisions. You probably don't need to be spending a lot of time cleaning and repairing for sale right now. Take care of yourself. Marlene (also known as anonymous)