I forgot to mention the status of my 2 rental houses.  Let's review: House 1:  4 bedrooms/2 bathrooms.  Under property management at a cost of $100/m.  The tenant moved out at the end of October.  The maintenance group sent me a list of needed repairs/cleaning.  Subtracting the tenant's deposit, they still wanted around $2K!  $1500 just for "touch-up paint".  Since I had re-painted the year before, I looked at the walls and they only needed a little bit of paint.  I did it myself for $20.  The new tenant moved in at the beginning of December.  I hope they stay longer than a year.

House 2:  2 bedrooms/1 bathroom.  This is the small house I bought with home equity for the tenant who was living in my mobile home.  He moved to Brazil in January of 2018.  I was overwhelmed with getting my home ready to sell and decided to try an experiment.  I contacted the local homeless tent camp and ask if I could house a Veteran.  They recommended two people, one was a Veteran and the other a civilian with a car.  At first they seemed agreeable to being roommates but then decided not to move in together.  The guy with the car wanted to try renting the house by himself and had just got a dishwashing job so I said we would try it for 3 months.
Well, with everything going on with my mother during the summer, 3 months stretched into 6 months but he wasn't able to keep a job to pay the rent.  Once I had completed the driveway install and fencing replacement, I told him he would have to leave so he did but left so much junk behind.  Now, when he moved in there was junk from the previous tenant and cleaning it up was part of the agreement but it didn't happen.  I took a day off, hired a housecleaner, bagged up everything and shoved it outside. 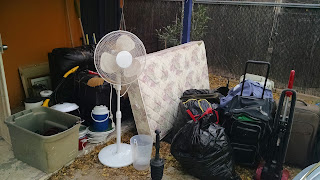 My handyman took it away to the dump.  A few repairs were made, sink unclogged, gates added to the side yards, and I listed the house again, this time looking for a Section 8 voucher tenant. I had 3 people interested but then the housecleaner told me she was interested.  I chose her.  She has a job and knows how to clean - Bonus!  I hope she stays a long time.
The cash flow is finally coming in instead of going out for the rentals.  I certainly lost a lot of money last year but I am back on track now.
Posted by Daizy at 6:53 PM

Good call, on the cleaner! Glad to see the houses are still going to be income producers!

With your rental situation beginning to stabilize, does his mean your early retirement plans are back on schedule? OR has the situation with you mom put all of that on hold for a while?

I saw in that last pic that the white floor fan is the same as mine! The plate-shaped white base was the giveaway. LOL

@JB, so far so good with the cleaner. I hope it stays that way. Income positive is such a relief. It is also good to know I can always sell the rentals. Thanks for stopping by the blog!

@Dave, hello my faithful commenter! My retirement goals are much more stable. Since my rental income is variable, I'm working on by back-up savings to last between the time I retire/switch to part time, and the time when I can access my 401k funds. Two more years and that savings plan will be funded. Because of my mother's poor health, the official diagnosis is vascular dementia, I doubt she will be around two years from now but if she is I will delay my plans as needed.