My goal each week is to go straight home after work as much as I can.  This week is already filling up.  Typically, I visit my mother on Tuesdays and Thursdays and I feel bad when errands get in the way.  One rental house was having trouble with the stove so I arranged for the repairman to come by between 12 and 3.  I work nearby so I drove over to pay the repairman, twice actually, once for the estimate and once again to pay because he had to go pick up the part. It would be nice if he took credit cards over the phone but I guess they aren't that advanced.  $388 for the ignition switch replacement.  That was right on the border of replace rather than repair but the tenant likes the stove, she actually hugged it when I mentioned replacing it, and I didn't see the same style online.  It isn't that special, it just has a place in the middle to rest pots, kind of like the ones with a 5th burner except it doesn't have a burner in the middle.  The repairman said that the ignition switch was the main thing that goes out so it should last for a long time with a new switch.
I cancelled another after-work vet appointment for my new dog.  His digestive system has finally acclimated to the new food and even though he still licks at his leg where he had a lump removed, I am going to make him wear the soft collar and give it more time to heal because the vet doesn't have any sure-fire solutions, just more antibiotics (he has had 2 different kinds) and expensive blood tests ($330) to compare to the blood tests he had last month.
I also need to go out to my property and take some photos for the electrician.  My nephew is still living in the mobile home on the property and he has finally started doing his laundry.  This might seem like a simple thing but the washer has no water hookups so first he puts the drain hose out the window, then puts his clothes and soap in, then brings the water hose, which is hooked to the water tank, inside and fills the washer (top-loader).  Then repeats filling the tub with water for the rinse and voila!  Clean clothes.  That is the way I used to do it when I lived out there back in 2010 when I still had a washer and dryer in the old garage, before I had is taken down.  The electrician is coming out a week from Saturday to install a dryer outlet. 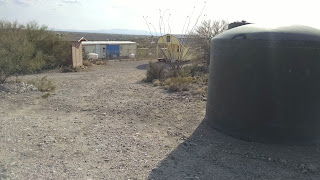 Normally, I would say, just hang your clothes to dry but I want a dryer outlet for myself when I eventually move out there and the electrician is also going to advise me on bringing power to the barn-shed.  After a crazy year, I finally have a little bit of time and money to think about improvements on my property.  I wish I could snap my fingers and have everything done like fences, the interior of the barn-shed finished, porches and rainwater collection set up, etc....  It's a big wish list.
Posted by Daizy at 6:44 PM

It is good to see you posting again.

I agree with Andy!

As usual, Daizy, I get worn out reading about all the things on your seemingly endless to-do list.

I thought your nephew was in college somewhere far away. Can't keep track of your family (other than your ailing mother :( ).

@Andy, thanks. I must admit I haven't been keeping up with reading other blogs. Last time I checked you were headed out to hike the trail and now Thailand? Wow, things sure change fast!

@JB, thanks. I was wondering if anyone would still be interested.

@6kids4me, glad I have a few readers left!

@Dave, the college thing didn't work out and he came back last April. I thought he would go back to live with his grandfather but is grandfather had a stroke and moved into a senior living apartment. So, he's back.

Hello Daizy, another long term reader here - since you were living in the mobile home - before you had any dogs (just the kitty) I think you were living in an RV, before your nephew came to live. I have been checking every few weeks but see you have had so much on your plate. I don't think you should really make any long term decisions right now since you have so much going on. You can post here and know that your followers want to know what is going on too.

Try to take some time to just be once in a while. You have so much on your plate.

@Anonymous, wow, you have been reading for a long time. It seems like so long ago that I just had a cat in the RV. Thanks to those frugal days I am where I am today, (along with some generous gifts from my parents). Thanks for sticking around!