I was beginning to think that the property tax bills wouldn't show up this month, but, guess what showed up yesterday?  My 3 tax bills.

The bill for the actual mobile home arrives later and it is usually only $100.

I estimated $3,000 for my property tax so it looks like I am within my budget.

The house I am living in now has an escrow fund for the property tax so I don't worry about that.  Once I pay off the mortgage I will have to pay that myself.

And, guess what showed up in my inbox?  My rental house rent statement which is a negative $185 for this month.  Ugh.  I was hoping it wouldn't spill over in to next month.  The bill for replacing the control board on the A/C was $1,065.  I hope it lasts a long, long time.  $650 of the rent payment goes towards my extra mortgage payment but I won't have it this month.  After I pay the property tax bills I will see if I want to borrow from that fund or skip the extra payment this month.  I could pay the property tax in 2 installments but I like to pay it all at once and get it over with.

My ailing dog had another vet visit last week.  The vet wanted to try a medicine called DDAVP (also called Desmopressin).  For some reason, no one in that office is very good at finding the best price for meds.  First, they called in the prescription to a local compounding pharmacy.  If you don't know, and I didn't know before I had dogs, a compounding pharmacy takes a drug and changes the dosage or method of administration, for instance, taking a powder and turning it in to a beef flavored suspension at a puppy dosage.  They do this for humans too, although, I don't think humans choose the beef, tuna, or chicken flavorings.  The compounding pharmacy was out of the medication that I needed.  This is where it gets complicated.  The vet tech told me to go buy it from Walgreens and take it to the compounding pharmacy.  But Walgreens needed a prescription so the vet tech called it in.  I went to Walgreens to pick it up but they had misplaced the prescription and it wasn't in the computer.  The pharmacist found the paper but then we were all confused by what I was supposed to be buying.  Turns out I was supposed to buy nose spray from Walgreens and take it to the compounding pharmacy to turn it in to eye drops for my dog, except we didn't know that then.  I happened to ask for a price because Walgreens had to order it anyway and they said $216!!!  I knew it was going to cost $50 to compound it so I was discouraged and left without ordering.  I called the vet office and the person who answered the phone did a better job of explaining what I was supposed to be buying and the whole nose drops to eye drops thing. 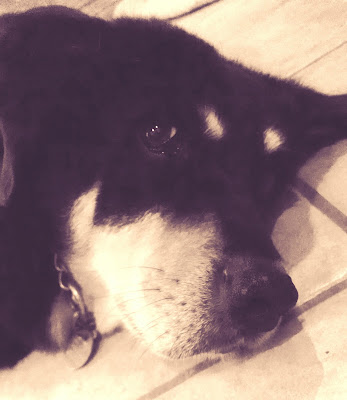 I did some searching on the internet and found the drug at Diamondback compounding pharmacy in Phoenix where I already get my Valley Fever medication for my other dog.  My request for a quote came back at $78.  I can't compare the price because I don't know the quantity that I was going to buy from Walgreens but I am pretty sure $78 is the better deal and it doesn't involve me driving across town, it will be mailed to my door.  I called my vet to make sure it was the correct drug and dosage and they called in the prescription.  Whew.  All this just to alleviate my dogs excessive thirst problem.  I sure hope it works and doesn't cause other side effects.

This has been another big bill month and it isn't even half way over.  It is months like this that make me worried about leaving my stable job and paycheck.  Simplifying is going to be the key.  I don't think I can financially handle more than two pets at a time.  The others (and you know there will be others) will have to be fosters so that the rescue pays for medical treatment.  Rental houses cause me stress even though they bring in income.  If I can arrange my finances so that the rental income is discretionary instead of needed for bills then that may be alright.  I have too many vehicles and I will remedy that after my nephew goes to college.  Oh, and speaking of college, my nephew got admitted to the college of his choice which also happens to be the school that we visited last spring where his parents met.  Only 11 short months until he is a college student!  Am I living in the future too much?  I think so.   Next month will be all about the FAFSA federal financial aid, grants, loans, and scholarships!  What an education I am getting.
Posted by Daizy at 8:02 PM

When I was putting together my ER budget, I had to plan out my expenses and income for the whole year in advance instead of a more "back-of-the-envelope" plan I did a month or two at a time. This was mainly due to my income flows being once a month instead of once every two weeks. I needed to build up surpluses from one month to cover the deficits caused by the lumpier but less frequent expenses such as auto insurance and income taxes. But even with those surpluses, I still built into my budget a general surplus to cover relatively small, unforeseen expenses. And I have a slush fund available to cover larger, unforeseen expenses. It looks to me that you can use your rental income to fund a slush fund as long as you aren't tapping into it on a regular basis.

I hope Jimmy Dog is doing well. He is lucky to have such a caring person.

My opinion on rental properties is that they can be pretty profitable if you do as much of the work yourself as possible but if you outsource most of it you are probably better off just investing in stocks/bonds/REITS/etc. Have you estimated what your Safe Withdrawal Rate (most people use 3% to 4% of invested assets) would be if you sold all but one of your properties? If you think you could live off of that (including both known and unforeseen irregular expenses) you might consider going that route when the time comes.

Yes, I can't depend on the rental income so it will have to be extra. This is taking longer than I hoped but I certainly don't want to run out of money.

Thanks for your well wishes for Jimmy-dog.
I am a terrible landlord so property management was my only option besides selling it but housing prices fell so much that it just recently became worth what I paid for it. Now that the prices are up I will consider selling it and investing when I am ready to retire.
My retirement funds meet the 4% rule after age 60 but the tricky part is having enough to fill the 10-15 years of pre-retirement without having to get another job.