The Price of Compassion

A lot has been going on and I haven't written about it because when I finally get in to bed at night I just want to play Bejeweled and snuggle with the dogs until I go to sleep.

1)  I was so confident that my nephew would get his license (yes, he did) and be able to drive himself to school thus enabling us to stay at the house instead of traveling back and forth to the mobile home so that he could ride the school bus like the did last year, (run-on sentence alert) that I got a new foster dog. 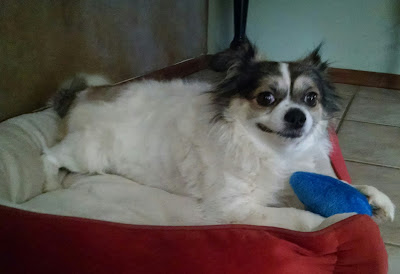 He is a 12 year old long-haired Chihuahua with Cushing's Syndrome (like my other dog has, or so I thought).  He is a bit of a brat when it comes to food and not wanting to go in the bedroom at night but otherwise, he is very soft and cute and his vet care is covered by the rescue.  Maybe he will get adopted even with his age and issues.  This does mean I will eventually have to take him to PetSmart adoption events.  He got neutered last Saturday so I don't have any more excuses except lack of time.

2)  Someone in the dog rescue group asked me if I could provide temporary housing for a handyman and his 2 dogs who were getting evicted at 1pm that day.  I have been burned before when believing sad stories but I decided to take a risk and help someone again.  He had references and I printed out a standard lease along with some extra rules for the mobile home.  He was thrilled to have a place for himself and his dogs and he has busied himself with the list of projects I gave him for fixing up the mobile home and property.  The biggest challenge has been organizing the projects and finding time (and money) to buy the materials.  After I dropped the foster dog off at his neuter appointment last Saturday, I went to Home Depot to buy gutters and attachments and wood boards for the steps.  Originally, I had planned to drive out to the property immediately but it was so hot I went home, took a nap, picked up the foster dog at 2pm and then my nephew and I went out to drop off materials.  This Saturday I plan to go out and help install the gutters.  We have had a lot of rain this week and none of that water is being collected.  It's a shame.  And also, he needs water to flush the toilet, so, gutters are the #1 project.  I had planned to start these projects in the late fall when it would be cooler but now the gutters can't wait.

3)  My black and tan dog (the one that I did the DNA test on and found out he is a bloodhound, Austr. shepherd, Austr. cattle dog, and chow chow) was diagnosed with Cushing's Syndrome last year. 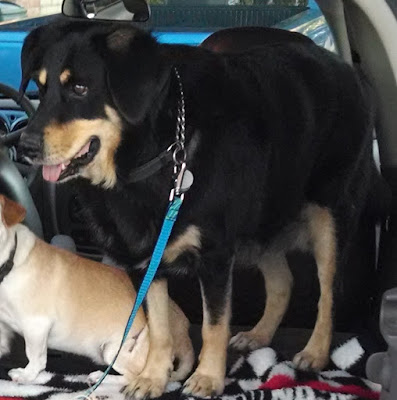 He has gotten worse in the last 2 months and can barely walk.  I took him to the vet again yesterday and the vet says he has a Pheochromocytoma tumor which has some of the same symptoms as Cushing's but the best course of action for this tumor is surgery.  I have a surgery consultation next Tuesday.  I have no idea how much that will cost or how much I am willing to spend.  I guess it depends on how long they think he will live if the surgery is a success.  Usually, dogs are diagnosed when they are around 12 years old but he is only 7.  If I could buy him another 5 years, that would be awesome, but I don't want him to be miserable.  One of the reasons I did the DNA test when I did was because I was worried that he wouldn't live long.

So, to sum up, I have no money and no time but I do have someone to work on projects for me.  That is a bit frustrating.  I'll get through it even if it means adding a few months on to my mortgage repayment plan.  That is why my plan is flexible after all.
Posted by Daizy at 6:29 PM

That little white dog is adorable, and oh, I so hope the surgery will be successful for the Black and Tan. I'll be hoping good thoughts about the handyman. You deserve to have this work out because you do so much for others. Hugs to you, Daisy.

That's a good thing you are doing with the guy in your mobile home. I hope it works out for both of you. So now is not just doggies that get fostered :)

You are an angel, Daizy - a literal angel - for helping out that contractor, his dogs, and this new foster dog. God bless you.

Thanks again for your kind comment yesterday. And I've been looking for good new blogs to add to my list -- welcome to the blog roll.

You are the best Daisy! We need more people like you in the world.

Sorry to hear about Jimmy dog. My dog was almost 12 when finally diagnosed with Cushing's. It was the first I heard of the disease. The hardest thing I've ever had to do was humanely euthanize him when he eventually went blind from diabetic cataracts, could no longer walk and kept getting sick with infections that seemed to become more resistant to the medicine we gave him. I hope your doggie can be completely healed with the surgery (or at least that you can halt any further progression).

Thanks, Kim. I find out about the surgery tomorrow although they are talking about an MRI first. Sounds expensive but I'd rather have him than the money.

Lol, Lizzie
That is true. I call him another dependant because now I have mom, nephew, dogs, AND a tenant that I am responsible for. I thought I was simplify my life!

Thank you for the honor, Done by Forty. I don't remember how I found your blog but I have it on my list that I read on my lunch break. I was thrilled to find a fellow Arizonan. I shouldn't complain about the heat because it is always hotter where you are!

12 seems to be the age from what I've read. I'm sorry to hear about your guy. I know I will have to make terribly hard decisions soon but maybe it can be put off for a year or two. Thank you for your kind words.

12 seems to be the age from what I've read. I'm sorry to hear about your guy. I know I will have to make terribly hard decisions soon but maybe it can be put off for a year or two. Thank you for your kind words.