What's in a Mutt?

Ever since I got my first foster dog, I have been curious about their breed or mix of breed.  I never had a dog as a child and didn't start fostering dogs until I was 38.  Or maybe it was 37, I can't remember.  Anyway, after getting the first few foster dogs adopted out, I got a 5 month old goofy puppy named Jimbo.  I wanted a dog for myself.  One that wouldn't leave.  One that could show the other dogs the house rules.  The name didn't fit but I wanted to keep it similar so I named him Jimmy.  My mother objected because my father's name is Jim and she calls him Jimmy so, to differentiate, Jimmy the dog became Jimmy-Dog.  That is his official name on his dog tag.  Sometimes we would call my dad, Jimmy-Dad, just to be clear who we were talking about.

I have always wanted to know what breed of mutt Jimmy-Dog is.  The pound had labled him Rottweiler but I didn't think so.  He bayed like a hound, had the neck folds like a hound, had the hair like an Australian Shepherd, and had the coloring of a black and tan Australian Cattle Dog.  DNA tests aren't cheap.  They run around $70 and up.  But Jimmy-Dog won't be around forever and I knew I would regret it if I never found out.

For my birthday this year, I bought a Wisdom Panel DNA test and sent it in.  Guess What?

I knew it!  Well, I wasn't sure which kind of hound but I had just visited a friend with a pure Bloodhound and I was noticing the similarities. 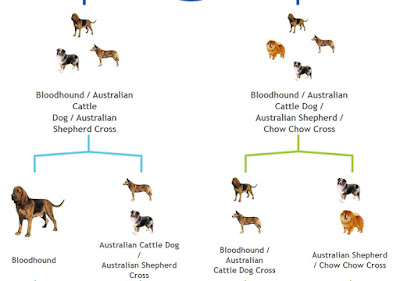 It was expensive but I'm glad I did it.  I used credit ard rewards points so it didn't affect my budget and now the question has been answered.  Will I buy another test for my other dogs?  Probably not, even though Wisdom Panel gave me a $15 off coupon.  It's tempting but Jimmy-Dog was the only one I was really curious about.   One less thing on my want list.  Now I can go back to saving for finishing the barn-shed, installing rainwater catchment, and planning an awesome dog yard.
Posted by Daizy at 8:06 PM

He is a cutey but doesn't have that big Rottweiler jaw. I notice that your dogs have the same breed names as ours but dont look so much like them. I wonder if its because they have evolved and bred separately or whether it is because we just use the same name for different dogs. Interesting

Interesting indeed. I haven't noticed that. Which ones are you thinking of that don't look the same?

What a fun birthday gift! I think sometimes if they don't have the super long ears no one every thinks hound. :) He looks like a fabulous and fun guy!