Too Hot to Cook

It's been hot.  105, 107, who cares, it's just hot.  Every once in a while I think, "I should bake something or cook something" and then I remember how hot it is especially with just an evaporative cooler and no air conditioning.  I'm stubborn though.  I won't spend thousands of dollars to get air conditioning.  I just complain about it being hot while loving my low electric bills.

Anyway, I had an abundance of cherry tomatoes from my plants that are as tall as the roof and I decided to make sauce out of them.  I now know why people don't typically make sauce out of cherry tomatoes.  There isn't much to them.  I cut them in half and simmered them until they looked soft.  Then I took my stick blender and chopped them up.  I tasted it.  Too bitter with all the seeds.  So, I strained out the seeds but that also strained out most of the skins and pulp.  I was left with tomato juice.  I added a small can of tomato paste along with spices and I had sauce again.  I'm not sure how much of it was actually from my tomatoes. 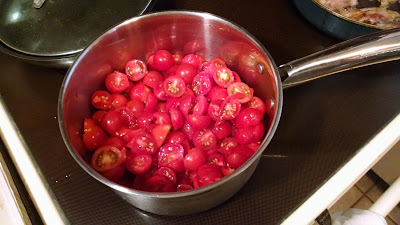 Well, at least I used up a lot of cherry tomatoes.  The hornworms attacked the plant and trimmed it down for me.  I only get a dozen tomatoes a week now.  I'm sure it will bounce back when the weather gets cooler and I will be drowning in cherry tomatoes again

My other cooking experiment entailed a bright idea I got while watching a video on Panko chicken.  I bought Panko breadcrumbs a few weeks back but hadn't been brave enough to try them.  I didn't have any thawed chicken so I thought I could Panko some summer squash and zucchini.  It seemed like a good idea until the pan started smoking. 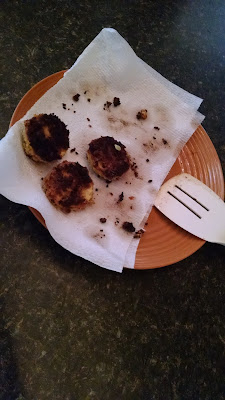 I attempted to eat them anyway but it was like eating tasteless squash with burnt toast.  Luckily, I didn't Panko all of the vegetables.  I tossed the rest with olive oil and JoJo seasoning and it was delicious.  No Panko needed.

I think I will stop trying to be creative in the kitchen until it is under 80 degrees outside.  That might not be until November.  My nephew is returning the day after tomorrow and I will have to plan dinners again.  Idealy he will help me.  I rarely eat dinner and prefer to eat lunch as my main meal.  It should be easier to make meals this school year since we are at the house, not the mobile home with just a 2 burner stove top which couldn't be on at the same time as the microwave.  He has been visiting his grandfather in Minnesota and his aunt in California.  Maybe he will have some new meal ideas.  That's probably expecting too much.  I have asked him what he eats at other people's houses and he can't remember.  I made lasagna from scratch once and served it with Stouffer's lasagna.  He ate them both and couldn't remember which he liked better.  I don't think this is something I can win.  I'll just try to teach him to make a few things so he doesn't end up living on cereal and bologna sandwiches.  One more year and then he can go live on cafeteria food at college.
Posted by Daizy at 8:16 PM

I find the same thing when we are in Crete, plus hot weather takes your petite , which can only be good.
Maybe not brilliant that he cant tell lovingly homecooked lasagne from packet version but at least he wont be a fussy kid. Someone who just eats what they are given far preferable!

Yes, not fussy is preferable. I just get annoyed when he comments that I don't cook. There is a difference between not knowing how and not cooking because the time and effort is not appreciated. Maybe when he learns to cook more he will appreciate the effort.

how funny he can't tell the difference in lasagnas. I love fried zucchini, which i hardly eat anymore cause I don't do carbs or restaurant food, and that is best purchased from professionals. It is great have been able to grow so much this year. Next year you can add more plants and another vegetable or something

I just planted some winter and summer squash. Maybe it will produce something . I could make a zucchini-noodle lasagna and see if he can tell the difference!

Don't use olive oil to cook the zucchini. It has a low smoke point, meaning it will burn.

I would kill for ac. I figure I can cut back elsewhere. Besides, ac is necessary for my health.

So very true. I need to buy some oil for cooking. I would love AC but the price they quoted me was around 8k because my whole service panel needs to be upgraded in order to add it. It would be cheaper to have a hole put in my bedroom wall so I could add a wall AC but I don't think that would add any value to the house and I plan to sell it within the next 2 years. I don't know if I can survive 2 more summers with just a swamp cooler. Ugh.