I used up my last extra vacation day last Friday. It sure was nice to have so many 3 day weekends at the end of the year.  I hope it works out that way next year too.  So, what did I do?  Slept in until 9 and then looked around for a medium sized chore.  The stairs for the old entrance have been bothering me.  I let the dogs go out in that yard and sniff around because it is cold and, hopefully, the snakes are sleeping.  The stairs have been slowly rotting away but because the bolts are rusted, I couldn't replace them.  One step gave out last week.  I have bolt cutters now which I bought to cut the metal cable for the barn-shed tie-downs.  I also had one piece of wood which I bought over 5 years ago and 3 replacement bolts.  I cut the bolts off, drilled the holes, painted the wood, and fitted the step back on while the dogs supervised. 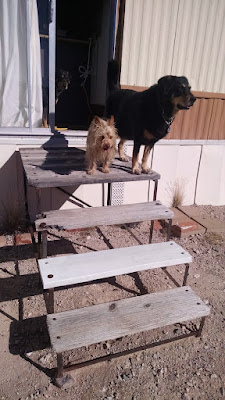 Can you tell which one is new?  The third step needs to be replaced next but I need another piece of wood and more bolts.  Eventually, I want to make a porch to attach to these steps.  Another future project.

Then I ate lunch and watched the very first episode of Battlestar Galactica which wasn't as corny as I thought it was going to be.  Since I had the paint out for the step, the next chore I tackled was painting the wall panel white.  I used a brush instead of a roller because I didn't want to use up a roller so it took a little longer to paint it.  Then I finished the trim along the ceiling.  There are still some visible seams on the wall that need to be patched but it looks so much better white. 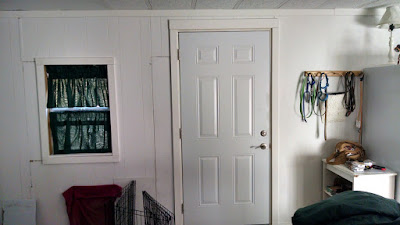 After that, I was tired but there wasn't enough time for a nap before my nephew came home.  I was watching Rockford Files when he came home and he said, "Have you been sitting on the couch watching TV all day?"  Oh boy, if he ever says that to his wife he won't be married very long.  I said if he turned around he would see that the wall had magically turned white.  I doubt he understood the effort that went in to it. Most of the projects I need to do require a lot of effort for not much pizzazz but they are satisfying to me because I can check that project off in my head and move on to the next.

Today was a trip to the vet for Sassy for her Valley Fever test.  I'll find out on Tuesday or Wednesday the results.  Hopefully she is getting better.  Then I did the usual pulling weeds and grocery shopping.  I made turkey pie filling over rice with corn bread.  My nephew thought it was delicious which is good because I have a lot of leftover turkey and turkey broth to use up.  I think I will try turkey soup and biscuits next week.
This week I need to get my Christmas shopping done so that my gifts don't arrive in January like last year.  My nephew has a choir performance but other than that it is a regular week of early mornings and homework in the evenings.  It sure will be nice to have a break soon.
Posted by Daizy at 9:25 PM

You need to get the dogs and the kid helping out more!

You should have ham for Xmas, that way you can switch up the leftovers between turkey and ham.

Ahhh, the satisfaction of a new coat of paint! I am a small landlord, too, and although you haven't asked for suggestions, I will say that I love to use foam roller covers for many painting jobs. They are easily reusable, as it is easy to wash paint out of them after each job. Coverage is good, too. For a paneled wall, you would of course use a paint brush for the "indentations".

Lizzie, the dogs were my step testers and the nephew washed all of the windows on my car when he got home. Still, the eat more than they help.

Thank you, Anonymous. It helps to have the right tools and supplies on hand. Of course, I have more experience too!

Livingroom, the rollers certainly make painting quicker and easier. I hope I can use rollers on my barn-shed when I paint it. We will see.