Four day weekends make me forget what day it is.  I've been thinking it's Saturday for 3 days now.  At least, today it really is Saturday but that makes me sad because tomorrow is Sunday and the week begins again.

Last time I told you about the pull test and the electrical system.  I forgot to mention that I put trim around the door.  It is a big improvement.  It would look even better if I painted the panel next to it.  On Friday I put trim around the window.  It needs more work though and some touch up paint.  I didn't take a picture.  I continued to put up trim around the living room until I ran out of time.  Someday I will get all of the trim off of the hallway floor...someday. 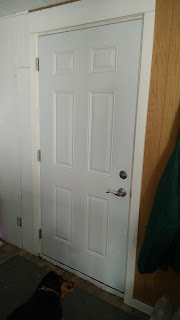 My nephew made Tirumisu for his history homework.  It was totally his idea but I amended the recipe so that it didn't include raw egg or rum.  People actually ate it. 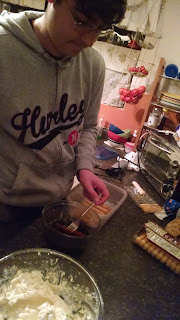 On Wednesday I got out early from work and decided that it was time to let the cats out.  A few nights ago, I heard what sounded like mice or pack rats under the mobile home.  The cats have been nibbling on a curled edge of the vinyl flooring so I thought they might like some adventure.  I blocked off other exit-ways and build them a cat ramp to get in and out of the back room.  I sure hope they come back! 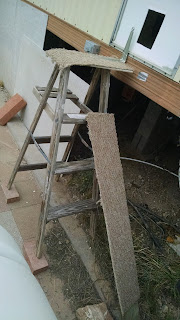 When I checked on them 2 days later there was evidence that they are still using my litter boxes and eating my cat food so maybe this home-base idea has worked.

My next project was to fix the leak in the water tank pipe.  I cut the pipe and tightened it by hand as much as possible.  There was still a slow leak.  I really didn't want to go to the hardware store on Black Friday but I did it and surprisingly, there weren't many people.  Even more surprising, the $30 wrench that I bought only cost me $16!  I am thrilled to finally have the right tool for the job. 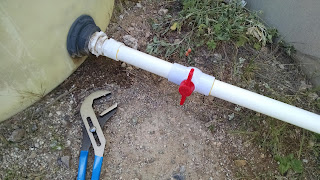 My nephew and I had Thanksgiving at home.  We decided to have a movie marathon starting with Stand and Deliver (my choice) and ending with Avengers: Age of Ultron.  We made it through 5 movies but moved Avengers to Friday because it was 3 hours long and we were a bit burned out on movies.  My turkey was still frozen even though it had been in the fridge for 5 days.  I tried ordering pizza but they were closed so I settled for filet minion and chicken cordon bleu from Walmart.  I'm sure glad they were open on Thanksgiving.  We finally had our turkey with all the fixings tonight.  That was my first turkey and it turned out great but next year I'll probably cook something different.  I only got the turkey because it was free with my groceries.  I'm tired of cooking, standing in the kitchen, and cleaning up leftovers. I need a day off!

WOW, you really are talented in a lot of ways. The door looks fabulous. You are definitely much braver than I in trying fixing up your home.

I am confused as to what tiramisu has to do with history, other than it's been eaten for a long time?

I hope your kitties come back. Just think on the turkey - now you have leftovers you can pull out again and again and make all sorts of things with.

Thanks, Anonymous. I consider my mobile home to be like my clubhouse. It doesn't have resale value so I feel brave enough to try things that I probably wouldn't try on my house in town.

The history assignment was to pick a food from another country and write a paragraph about its origins. I think the teacher just wanted food for the last day of class before Thanksgiving. Another kid picked tiramisu too.

I do have a ton of leftover turkey and I made stock for soup or at least that is the plan. My freezer is pretty full right now.