Whew.  A lot was accomplished but so much left to do.  I posted a picture of my barn-shed to a Facebook group and someone commented that it would have been cheaper to build it myself.  It annoys me when people say that.  As if I have all the time in the world to do everything from scratch.  My father build our childhood home from scratch with my mother's help while raising 5 kids together.  I am not my father.

So, I took apart this dog kennel that I have been moving from place to place for the last couple of years.  I used the panels to create a space for the cats in the storage room to help them acclimate before I let them outside. 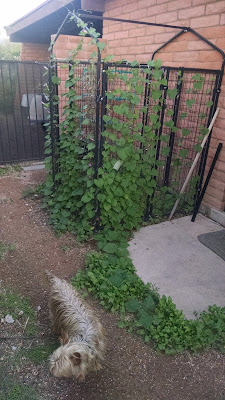 They promptly escaped but are still in the room somewhere.  That's ok.  The intent was to have a secure place for them to hide in case a dog gets back in that room.

Friday morning I had an appointment with the plumber.  The shower faucet in my bathroom has been leaking for over a year and I thought it was time to do something about it.  I called a real plumber because I wanted it to be done right the first time and in a timely manner.  While he was hammering a hole in the wall, I decided to change out the silver door knobs with these bronze ones.  They match the look of the house much better.  The door knobs have been on my to-do list for weeks.  It is great to be able to cross something off. 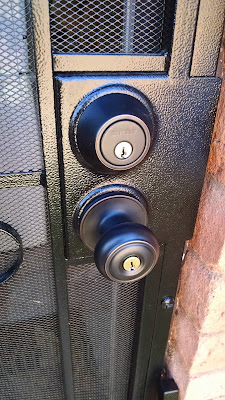 While the plumber was off buying another connector for the left side, I snuck in for a photo.  I wanted to see how he did it since I was planning to hook up the same kind of shower out at the mobile home.  It looked pretty familiar except the mobile home doesn't have copper pipes. 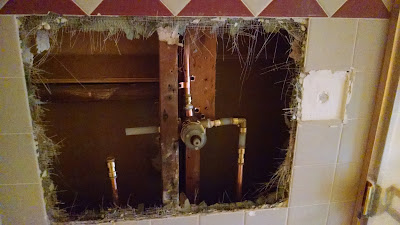 New shower head with single handle replaced dual handle.  I was sure there would be mold in the wall but it looked great.  One less thing to worry about. 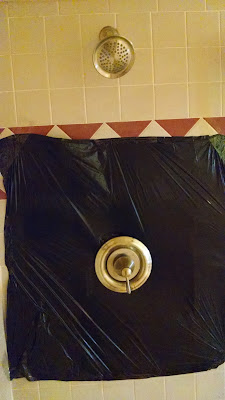 The bill was horrid.  $550.  I'll have to figure out how to absorb it in my budget.  And now I need the shower tile patched or re-tiled.  I vote for re-tile but I will probably live with a garbage bag for a year or two until I am ready for the bathroom make-over.

5 hours later, the plumber left and I went out to the mobile home.  I cut a hole in the floor and fed the pex pipe through.  It connected to the water supply underneath.  There was no going back so I worked on each step and tried to make sure I had a good fitting before moving on to the next. 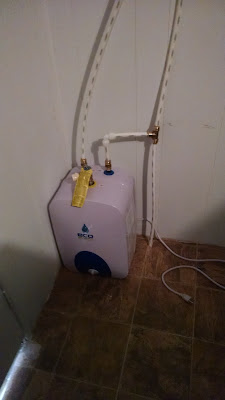 This is the little 2.5 gallon water heater that I bought to replace the 15 gallon one.  I just don't have time right now to install a 20 amp circuit for the larger water heater.  My nephew will have to take quick showers.  The water heater is in the storage room (with the cats) and I poked a hole in the wall and stuffed the pex pipe through.  I really don't care about how it looks at the moment.  My goal was a functioning shower. 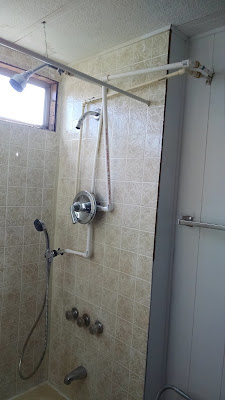 But on with the story, so yesterday I got it almost hooked up and I realized that I was missing two fittings.  Ugh.  Today I went to Home Depot, bought the extra fittings, and also got some plywood for my bed.  I bought a metal bed frame and need to cut the plywood to fit since I don't have a box spring.  I just realized that I didn't buy the 2x4's that I also needed.  Darn.  Oh well, I ran out of time for that project anyway.  I went out to the mobile home again and finished the plumbing.  I waited an hour and being impatient, turned on the water.  No leaks!  Well, the pressure release valve on the water heater wasn't tightened all the way but other than that, no leaks in the house!  Both shower heads worked and the water heater worked too.  I checked outside and, well, I have 3 problems.  One problem is the leaking water tank.  That's an old problem.  I'm waiting until the tank is empty before I fix it.  I didn't use teflon tape on the threaded fittings and that was a big mistake.  The next problem was a leak from where the Sharkbite metal fitting did not screw on to the plastic fitting straight.  I tightened it more and I think it will be ok for now but really should be replaced.  And the third problem.  The tub drain has totally disintegrated at one connection.  All the water drained directly under the mobile home.  Now, I did want to add a greywater line but I didn't really have it on my to-do list.  It has just moved up to  the top of the priority list.  For now I can catch the water in a trash can (there is almost 4 feet of clearance at that corner) and siphon it away from the building.

At least my nephew's shower is functioning with cold AND hot water.  That is huge and that was my goal for the last two weeks.  I had to stop what I was doing to go pick him up from the airport this evening.  Fall break is over and tomorrow we will start our school schedule again.  That means loading up the dogs and moving out to the mobile home and returning to the house on the weekend.

It feels good to have accomplished something.  Next chores: tub drain and getting my bed off the floor.

I'm tired just reading about the plumbing project! And I do hate those unexpected bills that make up a huge junk of the budget. Did Aidan enjoy his break?

Plumbing is so expensive! Must be because it's so hard to do!
I've caught up on your blog now. I'm going to miss reading a month worth at a time!
Blessings,
Michelle

Yes, Big Sis, he really enjoyed the Lion King. I asked if he went to the beach and he said no. So close and not even a visit!

I can't believe you read it all, Michelle! Maybe I should read them all. Then it would seem like I am getting a lot done.

Long ago, when I had car problems, some idiot woman would tell me she fixed her own car and I could, too. Finally, I said I needed a car within a reasonable time, that I did not have time to go to the trade school, money to buy the tools for this job, that it would be months before I could do what she suggested. As she stammered, I told her I made all my own clothes, bras and panties, too. Could she?

There are ongoing plumbing problems at my house, nothing I can handle.

Practical Parsimony, I totally agree. My projects take weeks, sometimes months and usually end up costing me more money. If I tried to fix my own car I would never have a working car. I think everyone should do what they can up to their own abilities. Some people are better at things so we can help each other. If you lived closer maybe I could help you with plumbing, at least some of it. I'm no expert.