Pictures!  I took a vacation day on Tuesday because I had too much to do.  My niece took the truck to pick up my thrift store stuff while I went out to the mobile home to wait for the Century Link technician.  While I was getting gas (and a donut) the Century Link tech called because he was lost.  I was still far away but I gave him directions and he actually found the place.  I got there a half hour later and he had already checked the connection from down the street and concluded that the connection box at my mobile home was bad so he snipped the wires and installed a new one.  He got in his truck to leave but then came back to make sure my modem was working.  It was not so he checked the line which was working.  I pulled out my back up modem and tried it.  That one worked but it isn't wireless so I have to buy a new one.  After he left, I took the modem apart.  My high-tech repair techniques (which involve shaking it and blowing on it) did not work so it was definitely dead. 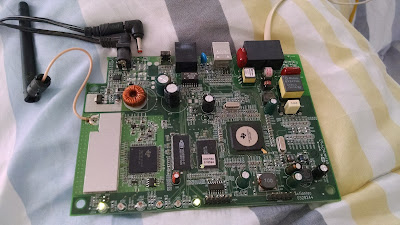 I found a compatible modem on ebay for $28.  It should be here Monday.  So, no internet yet.  Good thing I started this process early.  I don't actually need it for another 3 weeks.

Here is a photo of the vinyl flooring that my niece and I put in my nephew's room. I like it a lot.  I'm not so fond of the blue walls.  I think a gray-blue would have been better but we were trying to use up the paint from my shed.


Here is the hallway which is a different pattern.  I made the mistake of not cutting an extra section for the doorway.  Now I have to find a scrap that matched that I can glue there.  They sell wood doorway 'transition' pieces but they get quite expensive the wider they get.  I bought a one inch transition.  I don't think it will be enough. 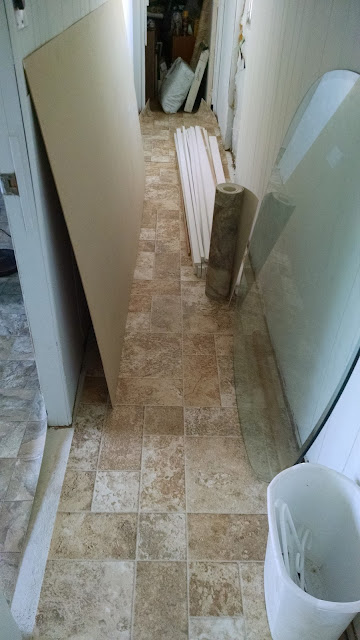 You can see that the trim is still stacked in the hallway.  It really needs to go on the walls asap before I fill the rooms with stuff. 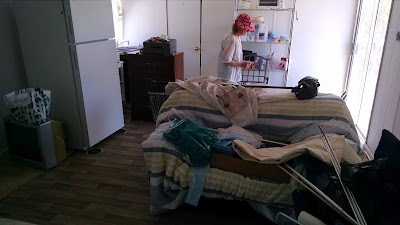 Here is a photo of my new fridge and my mother who is working on the curtains.  The fridge was a house-warming gift from my mother and it is perfect! 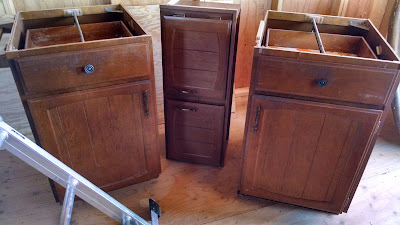 Here are the 3 cabinets that I bought.  They are being stored in the barn-shed for now until my mother re-finishes them.  She volunteered to do it.  I would have just used them as-is.  I still might if we run out of time.
3 weeks to go and the heat is not going away until October. 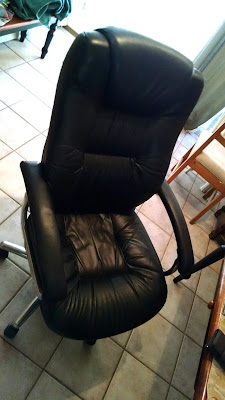 And lastly, there is this big office chair.  I picked out a small, wire framed chair with a gray fabric seat.  When my niece went to pick everything up, they couldn't find the chair.  They called me up apologetically and I said it would be fine if they substituted another chair, preferably, with wheels.  The small chair didn't have wheels but I wanted wheels.  So, my niece shows up with this monster of an office chair.  Samsonite brand, leather, huge compared to the little desk.  I wasn't sad though because I have been wanting a comfortable computer chair at the house for a while now so I took it home.  Oh, and it was only $5 because the chair that they lost was $5.  I love that thrift store.

Later I called Home Depot to see if the vinyl from the living room was in stock yet.  The manager said she would call me on Monday but didn't.  Turns out they just ordered it on Saturday so it won't be in until July 9.  Sooo frustrating.  I pre-ordered and paid for the piece.  I can't believe this vinyl purchase has been so difficult.  Soon it will be done and then I am taking the rest of the summer off from major renovation projects.  I still want to build a deck though.  Someday...
Posted by Daizy at 8:07 PM

wow, this is starting to look like an actual house! Is the nephew keen to live here?

He stopped by yesterday and made no comments neither positive nor negative. His one request was wifi and I have done that. He did suggest we buy another computer to have here but I said we would see if it was really a need since he gets a school laptop to bring home.