Not So Little Lost Dog

I'm beginning to wonder if Petey the PT Cruiser doesn't like me.  After over-heating on Thanksgiving, and leaving the car with my mother so she could drop it off at the shop, the mechanic couldn't find anything wrong with it.  He even drove it home and back but he couldn't make it over-heat.  They didn't charge me except $10 for gas because of all the driving.  My mother is going to keep if for a while until it is convenient to exchange cars.  Until then I am enjoying the great gas mileage of her Toyota Camry.

On Monday, I needed to pick up antibiotics for my kittens after work.  It is always risky to go to the pound without a dog because I usually leave with one.  I prefer small to medium dogs but the dog that needed a foster home happened to be a pony-sized Great Pyrenees.  He was calm and friendly so I thought I would give it a try.  Well, he wouldn't get in to my car.  It took me over 15 minutes to coax him in to the back seat and I had to get in to the back seat myself in order to do it.  He rode in the car really well and everything was fine until we got home. 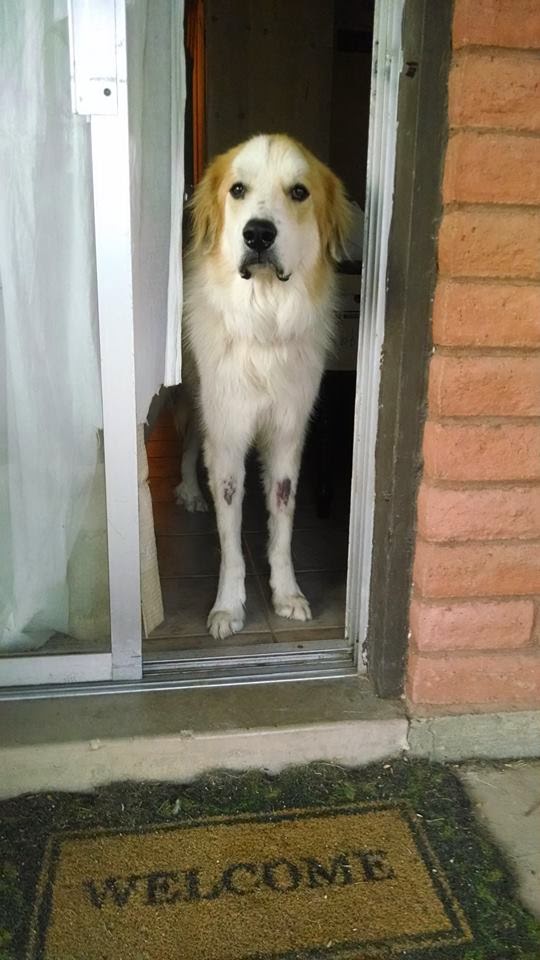 My terrier hated him.  My little dog would not stop barking.  Finally, I left the big dog in the living room while the rest of us went to bed.  All was well until the morning when I almost stepped in the very large puddle.  Next, I did some early morning mopping, and managed to get everyone fed.  The new dog did not want to go outside but I finally got it to go out a side door.  He was too big for my dog door so he was going to have to stay outside all day.  I went to work and hoped everything was fine.

Later, my boss arrived from his business trip and I got to leave early to drop him at his place.  On the way home I stopped at the grocery store and bought more chicken for my pony-dog since that was the only thing he wanted to eat.  I came home, put the chicken in a pot, fed the puppies, and looked outside for my pony-dog.  My dogs were there but pony-dog was gone.  Ugh.  Not knowing what time he escaped or what direction he went, I had no idea where to look.  I sent out the usual lost dog notices to Craig's list, Facebook, called the pound to file a report.  My printer chose to run out of ink so I had to make up primitive Lost Dog signs with a sharpie pen.  It was dark and starting to sprinkle but I posted some signs in the vicinity.  There wasn't much else I could do besides wait for someone to call.

I was sound asleep when the phone rang.  At first I thought it was my alarm but I figured it out.  The caller said that her friend found a dog that looked like mine hanging out with her horses and she took it to the Humane Society.  I was wide awake after that.  I couldn't get back to sleep until 3am.  When my alarm went off at 6am I was not ready to face the day so I sent a text to my co-worker that I would be late and went back to sleep for an hour.  It would have been convenient if my computer would connect so that I could work from home but I still haven't figured out that problem.  The Humane Society doesn't have humans to answer the phones until 9am so I had to be patient.  Finally, I talked to a human and she confirmed that the dog was there.  It is ironic that the finder paid $70 to drop the dog off at the Humane Society when she could have dropped him at the pound for free.  Everyone at the pound would have recognized him.  I wasn't sure if I was supposed to go get him out or what.  I really didn't want to bring him back to my house because I would have had to leave him in my house alone and he wouldn't have like that.  Finally, I called the pound again at 3 and they told me that the Humane Society wanted to keep the dog.

Well, that all worked out and the only damage was some trampled tomato plants where he jumped over the wall.  I have peace in my house once again, until the next dog.
Posted by Daizy at 10:02 PM

Hi is beautiful but i think maybe just as well you dont keep him :)

You're brave fostering a dog that size.
I stress out about whether to get a pet guinea pig.
I worry about possible vet costs.
And I have paid off my mortgage !

Well, Lizzie, it was a test and I'm glad it was a short test. Now I remember my little dog's incessant barking at big dogs. Too bad because there is another big dog that I would really like to foster. I better stick to the smaller ones.

Hello George G! The great thing about the foster program is that all vet care and medicine is free. Of course, if I keep one then that gets expensive.