The good news is:  I figured out what is wrong with my car.  The bad news is:  I have to take it to the mechanic AGAIN.  Let's recap.  The week before Thanksgiving my car over heated and I dropped it off at the mechanic.  The following Monday I got it back and I was $700 poorer but happy to have my car back.  Then, on Thanksgiving, the car over heated again.  I traded cars with my mother and she took it back to the mechanic.  They drove it around and tried to make it over heat but it wouldn't do it for them so they gave it back.  My mother and I kept driving each other's cars until it was convenient to switch which happened to be last Wednesday.

The next day I drove to the pre-Christmas brunch at my father's nursing home.  It was very nice, a waffle and omelet bar with fruit and meats.  The pineapple was awesome but they ran out.  As I was leaving I noticed something hanging under my car.  I poked at it and it was a plastic cover of some sort.  I went back to work because I didn't have time to leave my car at the mechanic again.  Friday, I was taking my usual lunchtime walk around the block with a coworker and I mentioned the hanging thing under my car.  There is hardly any clearance under the car so he suggested that I pop the hood and maybe we could see it through the engine compartment.  No, we couldn't see anything because the engine compartment is crammed full of engine stuff but he mentioned that I had a coolant leak.  I said, yes, the car overheated and the mechanic couldn't find the problem but I had seen it bubbling out of the hose connection below the radiator cap.  He barely touched the hose and it fell off.  I said, AHHH you broke my car!  But I was just kidding.  I said, see, I knew it was broken there and I told the mechanic but they couldn't find the problem.  Anyway, the coworker said we could glue the hose temporarily so he took me to the hardware store and I bought some epoxy glue for plastics.  Now it looks like this: 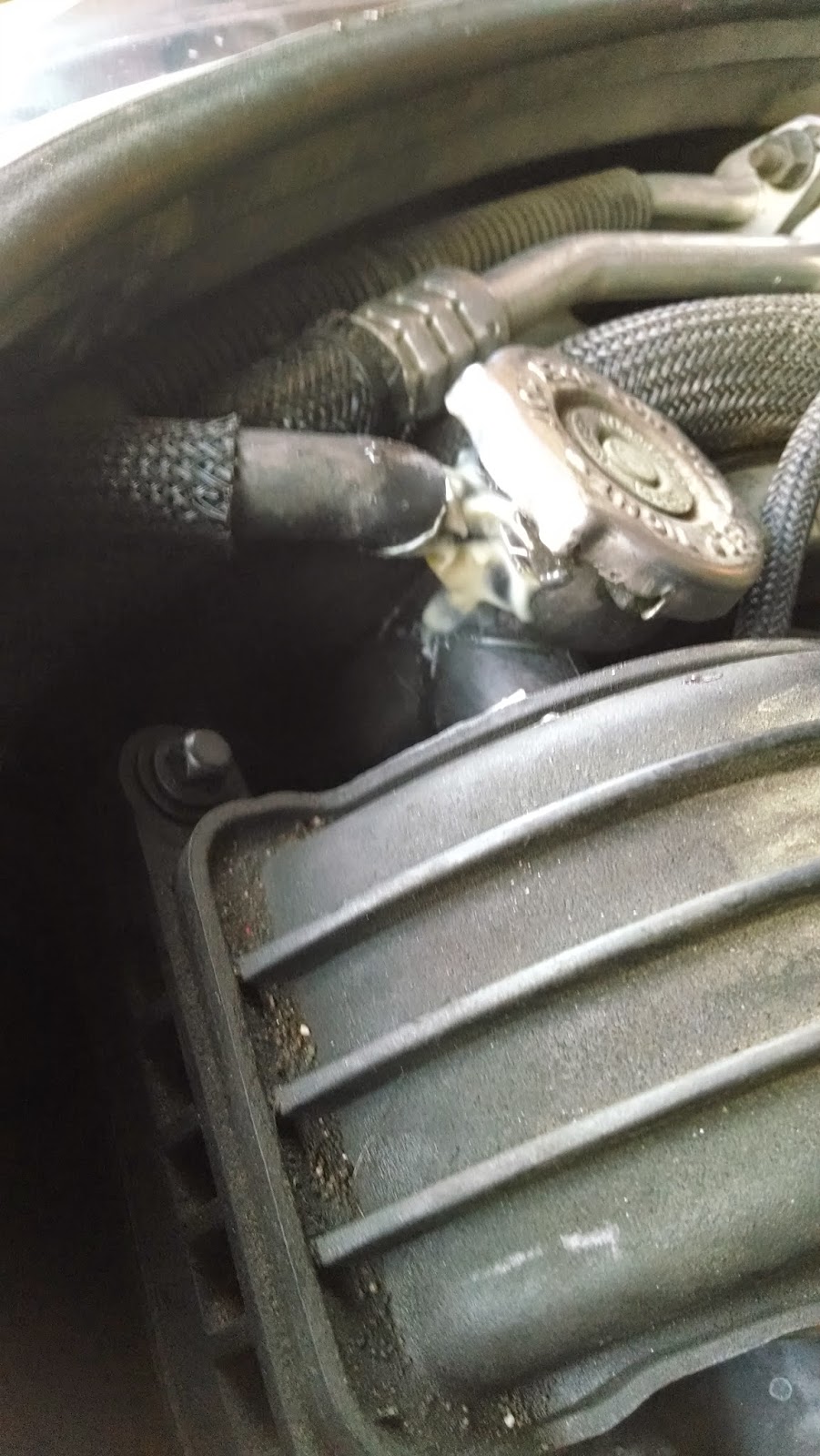 I made it home ok and I think it will hold until I can get it back to the mechanic on Tuesday.  Hopefully they will get it replaced by Wednesday and hopefully my mother will let me borrow her car again.  I hope this is the last repair that I need for a very long time.  And while they are at it, they better fix that hanging thing underneath too.
Posted by Daizy at 7:40 PM

I hope you don't get 'hosed' by the mechanic! (Sorry, Daizy, couldn't resist LOL!)

oh goodness me, talk about never a dull moment with the car

Hoho, Dave, very funny. I'm aafraid the receptionist thinks it is "just a hose". I bet it takes them a week to fix it.

Yes, Lizzie. If it wasn't so great for transporting dogs I think I would trade cars with my mother. My car likes her better.