Rough weekend.  It started on Friday when I came home to find the dogs had pulled out the plastic liner on my bed cover.  It was hanging out on the floor and I needed to cut it but I decided to give the dogs their evening treat first because they were running around excitedly and I didn't want to poke them with the scissors.  Next thing I know, my big dog is trying to jump on the bed, then he yelps and when I turn around he is limping.  I think he probably slipped on the plastic and twisted his leg or he did the splits while trying to get on the bed.  He limped outside and I was hoping that it was just a sprain.  He came back in and seemed to be ok.  Later that night, I helped him get on the bed.  Early the next morning, he tried to get up and yelped.  He managed to get outside.  I went back to bed and woke up an hour and a half later and he was still outside.  I tried to help him up but he was in a lot of pain and all sorts of terrible scenarios started going through my mind.  Broken hip, strained back, torn ligament, etc... I called the vet and they say they can get me in as an emergency case which means an extra fee and more waiting.  A few minutes later, she calls back and says they have had a cancellation so I can have a regular appointment.  Now the hard part, getting my 75 pound dog in to the car.  I tried putting his front feet up on the bumper but he yelped so that was out.  Next I managed to heave his whole body up and in the back of my PT Cruiser.  I must say the dog cargo space certainly came in handy.  We got to to the vet and I slid my dog to the ground.  He could walk but he yelped when stepping up the curb. 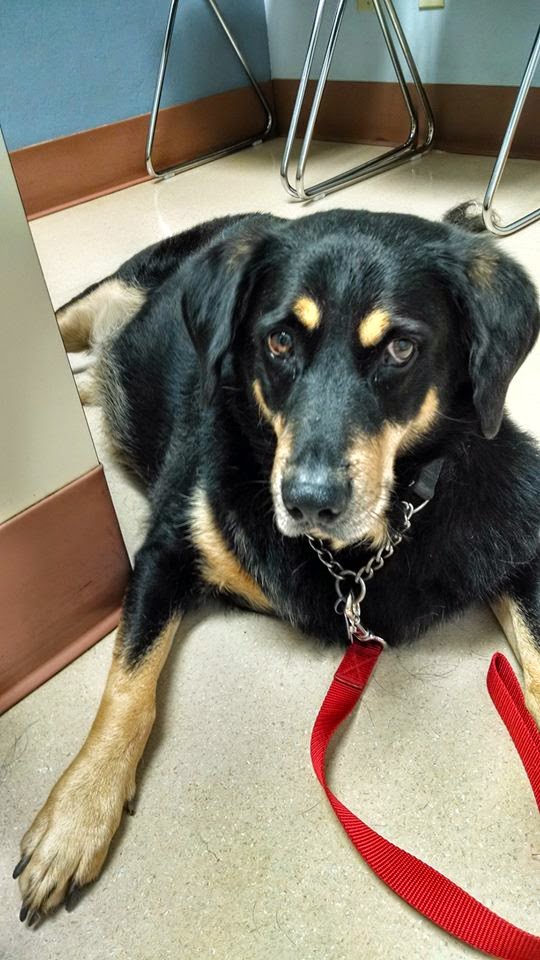 Anyway, lots of tests and x-rays were ordered and I went home but first did some grocery shopping while I was out.  The fall fruit selection was very boring, by the way.  I am sad that watermelon season is over.  Later I went back to collect my drugged-up dog.  The good news is that he didn't break anything.  The bad news is that he has an enlarged spleen and we won't know what that means until the blood test results come back.  My dog got anti-inflammatories, muscle relaxants, and pain killers.  I think I could use some of those myself after lifting him in to the car.

Today he is feeling much better and even jumped on the bed tonight.  This little trip to the vet only cost me $550.  I had decided that is was going to cost $600 so I wasn't surprised at the bill.  Of course, this made me think about my goals to semi-retire early.  I must be able to afford my lifestyle which includes the care and maintenance of 3 dogs.  The good news is that my future budget includes $700/m for my basic bills and $700/m for both projects and, if needed, unexpected trips to the vet.  Hopefully, I won't be needing too many of those.
Posted by Daizy at 9:09 PM

Daizy, can you buy medical insurance for your pets? I recall my parents had a policy for their cat back in the 1990s. IT would at least make your pets' medical costs more predictable.

Poor little fella. Step away from the doggy pharmaceuticals!!

They do have many more options for pet insurance now, Dave. I looked in to it again today and it could be useful for high dollar costs. In my particular case, it would have cost more with a year of $30/m insurance premiums, $100 deductible, and 80% coverage. I think creating a pet health savings account would be a good idea for me.

I'm weaning him off the drugs, Lizzie. Don't want a drug addicted dog.

Awww poor guy. What a sweet face. I fully can understand and appreciate pet care. It does add up. It is hard work to lift those big guys.

thequiltingdoberman, I always wondered what I would do if I had to lift him. At least I know I can do it now. If he had handles it would be easier. Maybe I should make him a full body harness with handles. :)

Yikes, hope the blood tests come back OK. I used to use a piece of plywood as a ramp up to the back of my SUV. It worked well, as an "official" pet walking ramp cost too much to make sense.

MW, how do you hook the plywood to the SUV or do you just hold it while the dog walks up and down? The blood test was pretty good. He doesn't seem to have a spleen problem after all but now they said he might have early kidney disease so I'll have him retested in 6 months.

I just lean it on the car and make sure it sticks up (highly technical term I know...) over about a couple of inches for stability. It was about 2 1/2 ft wide so I could slide it into the back no problem. Good news about the spleen, fingers crossed about the kidney.

My name is Emily, and I am with the community outreach team at Rover. I'd love to connect with you about our current project. Please contact me at your earliest convenience. (emily_s@rover.com)