At Least I'm Not Bored

I've been running around too much lately but that's what happens when I have too many projects going on at once.  On Wednesday, after work, I stopped by the pound to pick up the schnauzer that I had taken to get groomed the weekend before.  I should have never taken her back to the pound because she got kennel cough and slept through the entire adoption event on Saturday.  People don't want to adopt a dog that looks dead.  She will stay at my house for the next 2 weeks and, hopefully, she will be feeling perkier at the next adoption event.

On Thursday, I visited my dad after work and kept him company through dinner.  He was in a good mood and quite talkative although I can't understand what he says most of the time.  On Friday, it was nice to be able to go directly home after work.  Saturday I was up bright and early because the dogs were up.  I was pretty sure I would be able to get a nap later so I started on my chores.  The mountain of laundry took all weekend to conquer but I got a good start on it and then dropped the schnauzer off at the adoption event.  I love that I don't have to stay there for 5 hours.  One of my favorite stores, Ross, was nearby so I stopped in to look for comfortable shoes.  I found one pair of brown leather shoes for $25.  After trying on many unsatisfactory walking shoes in the women's section, I remembered to check the men's section since I have a wide foot anyway.  There I found some nice walking shoes with memory foam.  No longer do I have to wear the uncomfortable Nike's that make my feet fall asleep.  They were only $35 and I am actually looking forward to Monday a little bit just because I get to wear them.  I also grabbed some new sheets, socks, and a very soft blanket that I didn't need but it was only $8 and I have a weakness for soft blankets.

After the shopping spree, I went back home for lunch, more laundry, and a quick nap before I jumped back in the car, picked up my sad, lethargic dog who didn't get adopted, and headed to the airport to pick up my mother.  I was 5 minutes late and I didn't even get to fill up her car with gas because the pay-at-the-pump machine wasn't working and the line inside was too long.  We stopped at another gas station on the way home and got a car wash too so it all worked out.

On Sunday, I actually had a little extra time to work on my garden projects.  I cut down my gourds and started taking down the vines.  In the side yard, I had the bright idea to use these old dog houses as grow beds.  I am attempting the "air pruning" technique in the first bed. 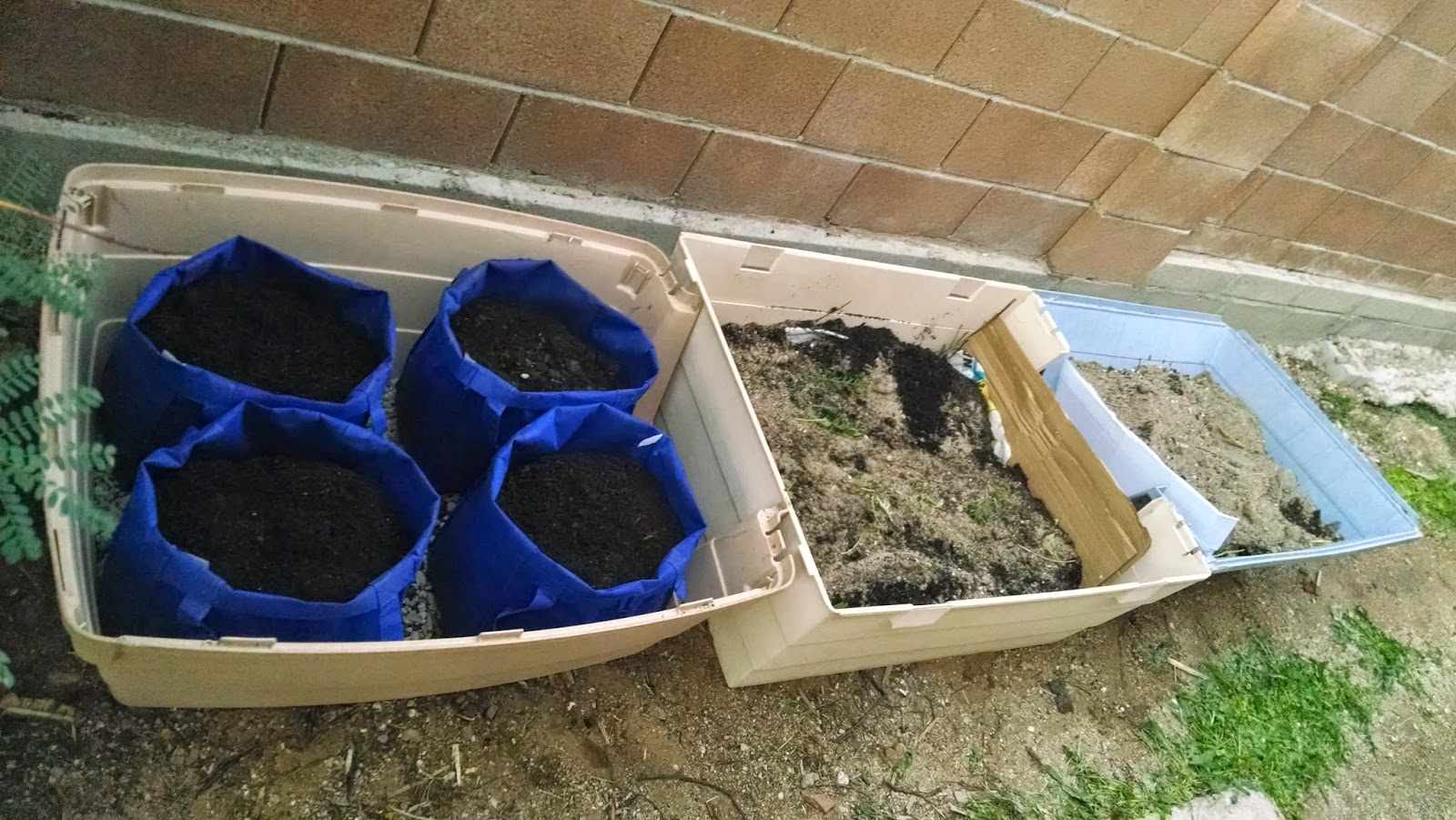 I filled reusable grocery bags with soil.  They sit on gravel and I am supposed add water to the gravel and the bags will soak it up.  That's the idea anyway.  I need some of those mosquito larva killing granules before I start although in a week or so it will be too cold for mosquitoes anyway.  I didn't plant anything yet because I ran out of soil but I have around 10 different kinds of seeds to plant that I got free from the local seed library.  I was going to throw out the dog houses because one was only a top and the one with the bottom was broken but then I realized that they would make great planting boxes.  Time will tell if my experiment will work.
Posted by Daizy at 8:26 PM

Daizy, I get worn out just reading about your list of chores LOL!

I would have to choose between animals and plants. I cant keep so many things alive :)

You know, Dave, I should know that I have too many hobbies when I get excited about not having any plans on the weekend. There's just so much to do.