This week seemed like it took forever but I got a lot accomplished with the foster dogs.  On Monday I took my 3 puppies to work with me and I was going to smuggle them in to the back room but our engineer offered to puppy sit so I set the puppy pen up by his desk.  They were very well behaved and didn't make much noise or much of a mess. 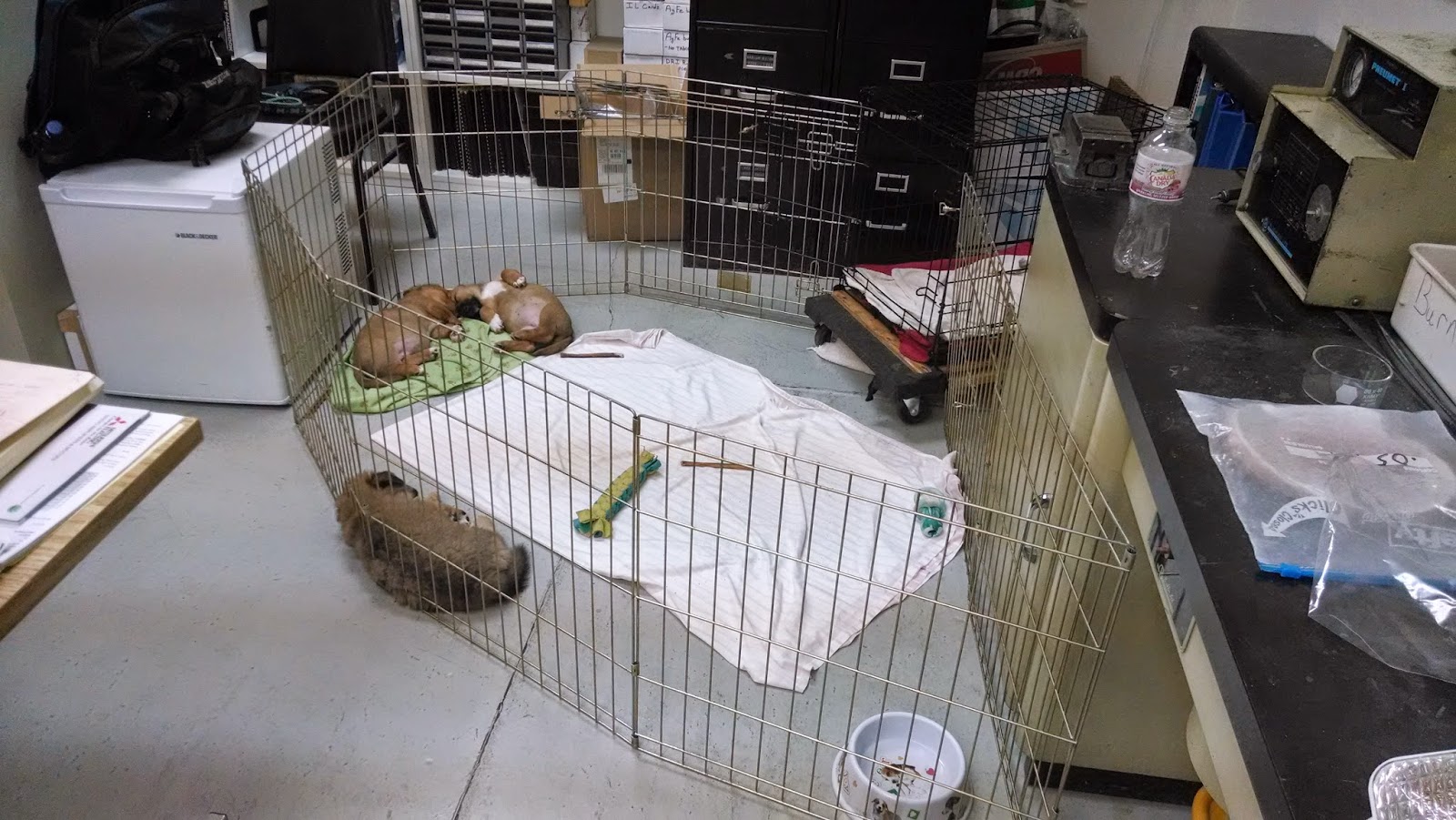 After work we had a vet appointment and all of the puppies got an A+ for health.  The next day I had to get up early to take the puppies and their mom to get spayed.  The mom got rejected because she was still lactating and I had to take her to work with me.  It is very early to spay puppies at 8 weeks old but there are 1,000 animals at our county shelter and they need to get adoptable dogs in to new homes as fast as they can since new animals are coming in everyday.  A couple of my co-workers think it is cruel to split mom and puppies at 8 weeks but that is the usual age to adopt out dogs from breeders so I don't think it is cruel.  My co-workers haven't seen the conditions at the shelter and they aren't willing to foster any animals so I shouldn't let their opinions bother me.

After work I went back to the shelter to drop off the mom who was getting adopted later and to adopt out 2 of the puppies.  I only have one puppy left which isn't ideal because she misses her playmates.  I am letting her sleep on the bed which means I get to get up 2 or 3 times a night for potty breaks.  That is preferable to listening to a lonely whining puppy all night.  She went to work with me this week too. 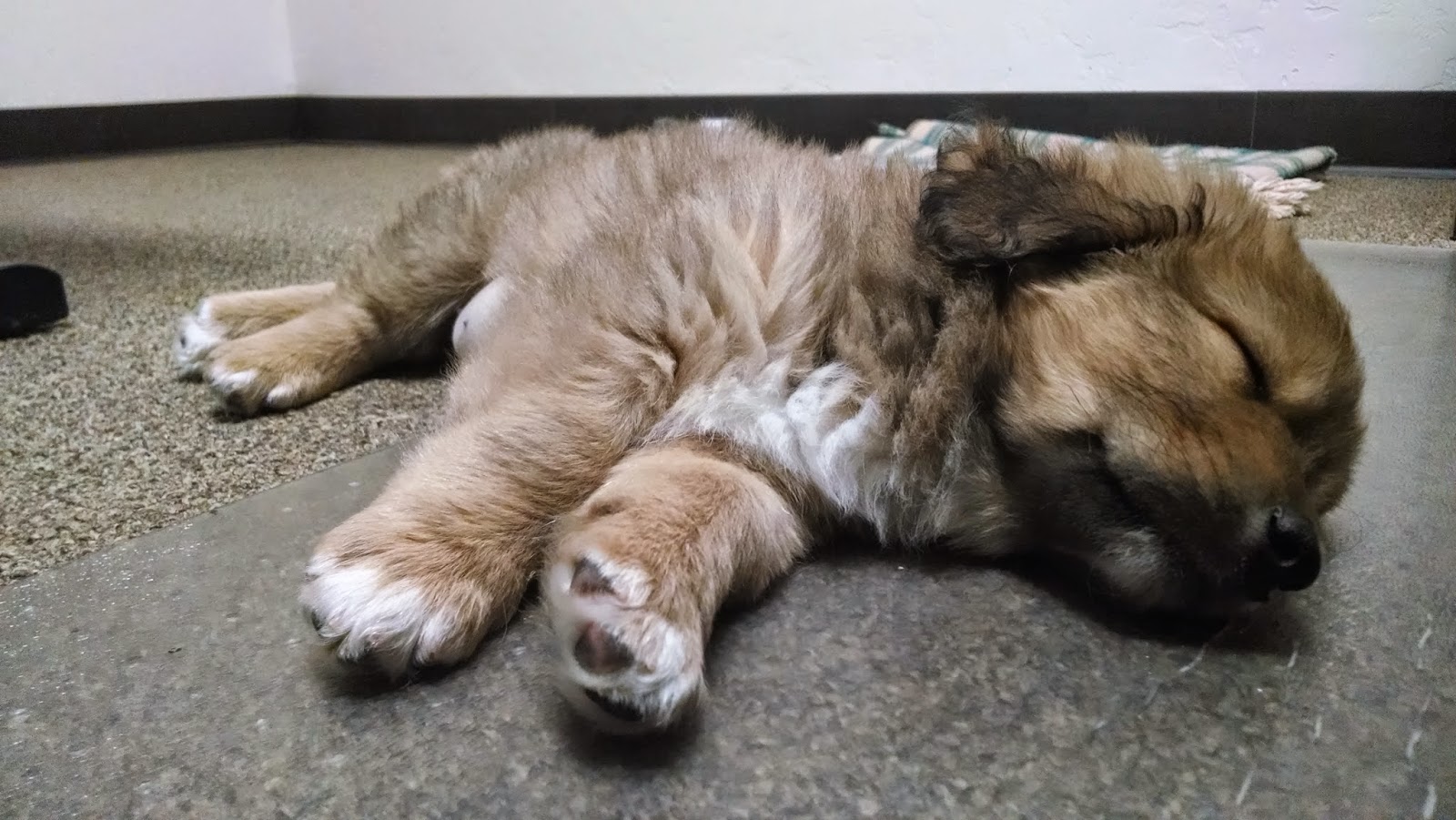 One co-worker likes to torment my puppy and she learned quickly not to trust new people.  The other coworker came in and remarked that the puppy was hiding and decided it was because she should have been left with her mother for 10 weeks instead of 8.  Sigh.  Maybe if certain other people didn't torture my puppy it would be more trusting but, gee, I don't know anything about puppies.  This is ONLY my seventh litter of foster puppies.  Whatever.  Puppy is getting adopted tomorrow, I just know it.  We are going to the pet store where some of the other shelter dogs will be waiting for new homes.  I'm bringing my other foster dog along to meet people even though she can't be adopted until Wednesday.  I am hoping to come home puppy-free and then I will take a nap!

Here is a video I made last night of my foster dogs.  The white one usually snaps at the puppy but she was being tolerant that day.  Foster pups playing
Posted by Daizy at 8:40 PM

8 weeks is fine with kittens but my puppy knowledge is negligible. Pretty sure you know best. I sometimes think your co-workers are not so bright!

It seems to perfect age to me. they are eating solid food and ready to bond with their human. Perfect time to start training too. It is also the perfect time to mess them up if they get ignored. Lots of bad habits are learned at this age.

I brought a puppy home at 8 weeks, it is pretty normal. The nice thing is that supposedly there is a pretty key socialization stage right around 8 - 12 weeks that a human can really work with.

thequiltingdoberman, that matches with my experience. At 8 weeks and after they start getting in to trouble like emptying the water dish, climbing the kennel, chewing the doors, etc... and they need instruction from the humans. What is ironic to me is that the rescue group made us keep the puppies until they were 14 weeks and I got criticism for not starting to train them but it was impossible for me to train puppies with mamma dog and siblings within earshot plus, they had no need to bond with me if mama and siblings were still there. This time I was glad to be able to adopt them out before they became brats and then I still get criticism. Can't please everyone, I guess.