Dumpster Diving with my Boss

On days that my boss flies out of town, he gives me gas money to pick him up from his apartment in the morning since I live closest to him.  Once I forgot to pick him up.  I got all the way to work and wondered where my boss was...oops!  This time I set my alarm for 6am and made it out of the house early.  As I pulled up I noticed that the dumpster was full of what looked like the possessions of a previous tenant.  Right on top were 2 big fiberglass pots, the kind I have been wanting quite a while now.  I even walked around Big Lots with 2 pots in my cart once but ended up putting them back because they were only half as big as I wanted and I just couldn't spent $20/each.

These wonderful dumpster pots were just the right size.  Only problem was, my boss was waiting outside for me.  Now, he's an understanding boss and he values frugality so when I asked him if he thought I could take them he said he didn't see why not.  We dumped out the dirt and I strapped them in the back of my truck.  I was thrilled with my prizes.  I tried really hard not to look at the other things in the dumpster.  The thought of good stuff going to the dump seems like such a waste but that was not the time nor place to do any in-depth digging.  Later, I looked up the price of similar pots from Home Depot.  I found some for $60.  Wow, I just pulled $120 from the dumpster.  My boss calls me 'trash digger' now but it was worth it to save them from the trash. 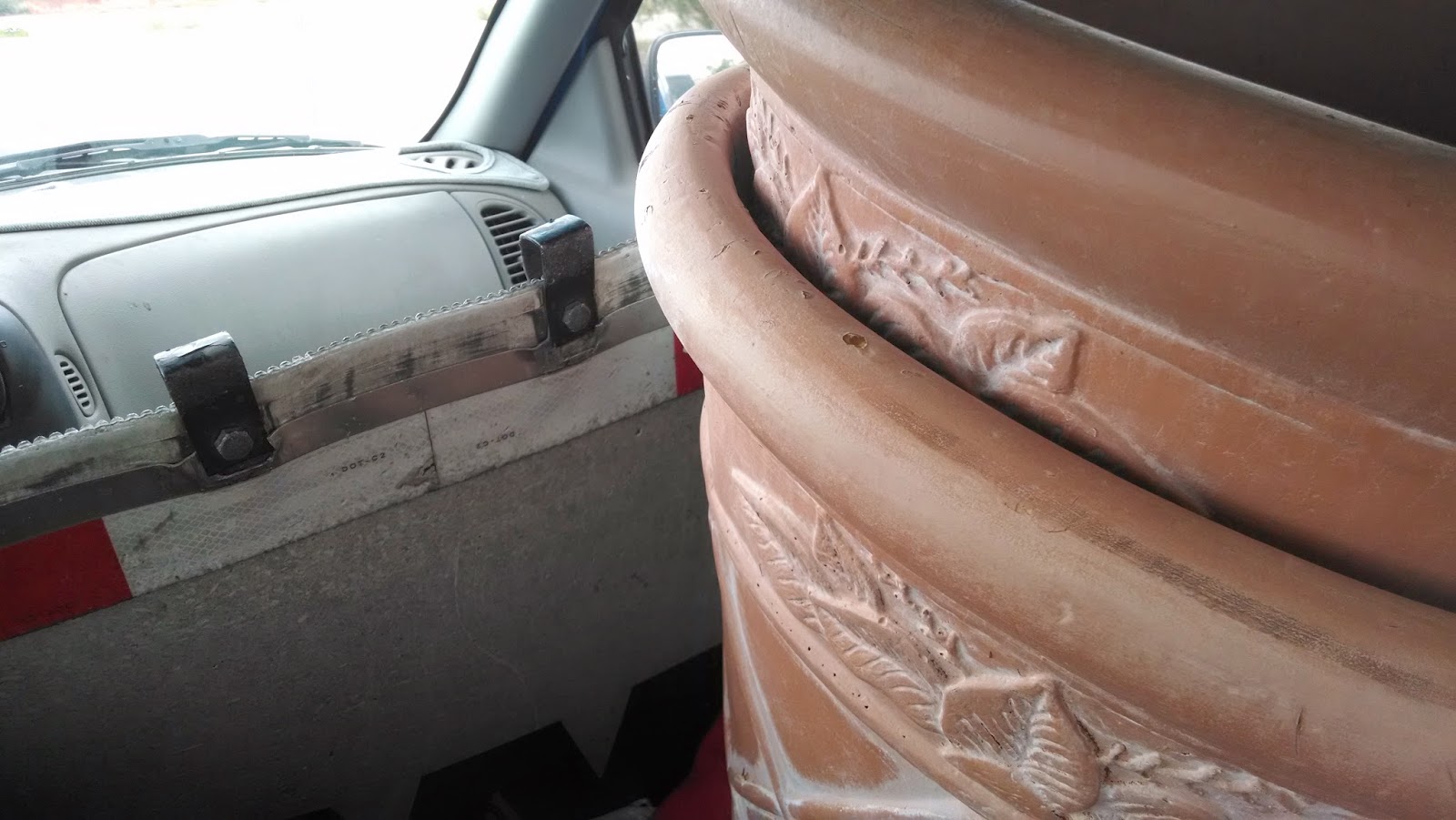 On my lunchtime walk, I picked up a semi-truck mud flap that had been on the side of the road for a few days.  I saw it there earlier but didn't pick it up because I couldn't think of a use for it.  Well, after work I was headed out to my property so I decided to use it to mark the entrance of my driveway.  Now instead of telling people to turn at the first thing that kind of looks like a driveway, I can tell them to turn at the mud flap.  It has a reflective strip along the top too so I can see it at night.  It goes perfectly with the rest of my trailer trash decor, and I do mean that literally since I have a trailer and trash.  Soon, when the temperature goes back to the 70's, I'll have to go pick up all that trash but not this week.  Wednesday is supposed to be 110F.  I have a few more months before I start on chores out there. 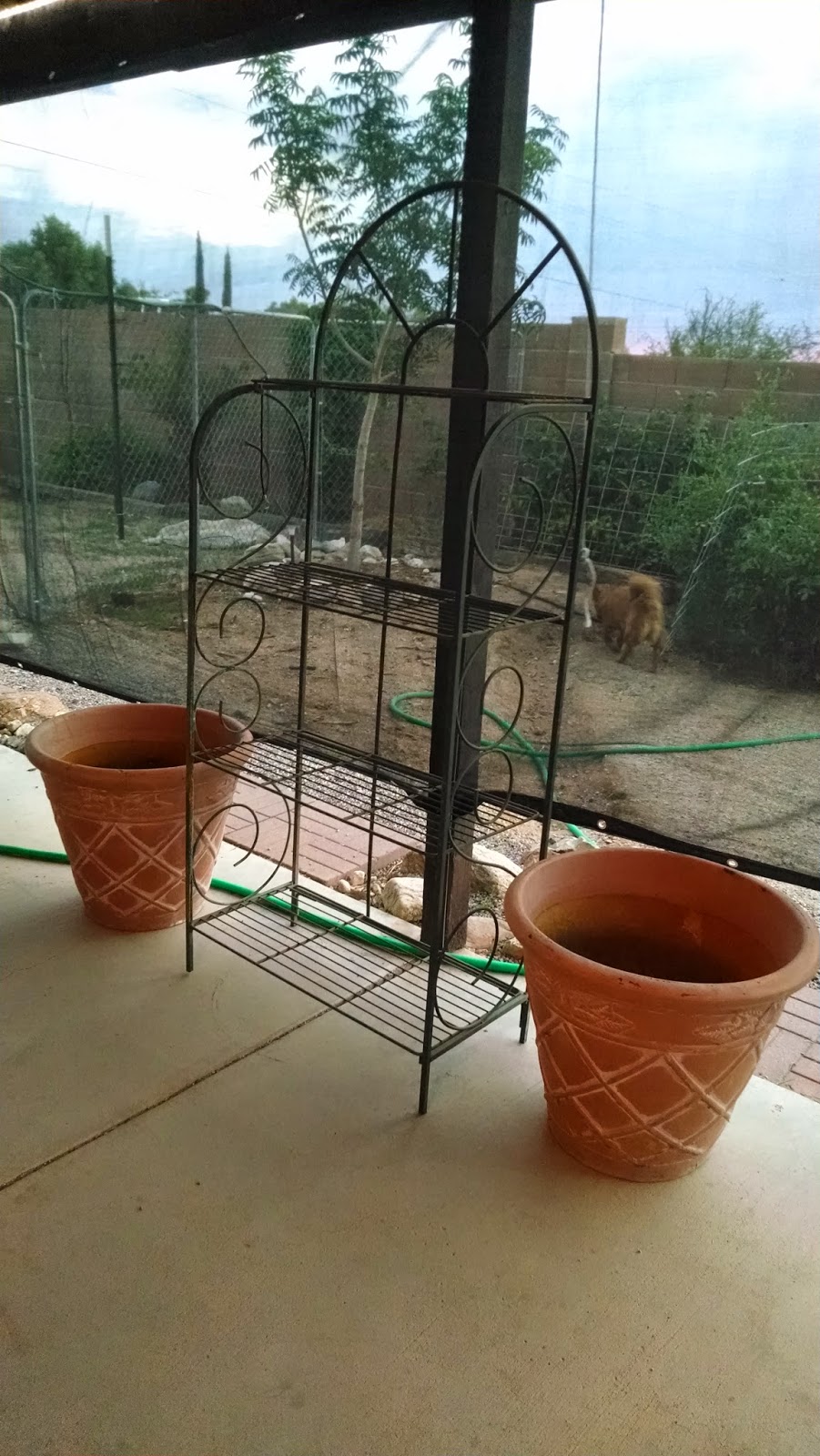 I did pick up my baker's rack that was in my shed  It will be at least 3 years until I move out to my property so I might as well use my things instead of just storing them.  I'm glad I brought it to my house because I was able to organize my gardening gear and it looks much neater.  Next step, fill those pots with dirt and plant more seeds!
Posted by Daizy at 8:31 PM

What a score!!!!
I am actually subscribed to Mom the Ebayer on youtube, and she is constantly showing the great things she finds in people's garbage. I am just shocked at the things people throw away. Good job for picking it up even though your boss was with you, who cares if he calls you dumpster digger lol.

Good for you, what a bargain. And good for him too!

B, I better not watch Mom the Ebayer. I'll be dragging all sorts of things home. I really need to be sending stuff out the door instead of bringing it it but some stuff is too good to pass up.

Yes, Lizzie, free is certainly my kind of bargain.