What did I decide to do today?  Well, it wasn't painting my bathroom.  The dogs woke me up at 7 and after we went outside and I watered the my baby trees I thought I would be ready for a morning nap but I couldn't go back to sleep so I decided to take the dogs for a walk before it got too hot.  When we got back home I wrestled my chi-weenie dog and managed to clip his nails which saved me a trip to the groomer.  He is so bad about getting his nails clipped.  I made ham and eggs for breakfast.  My boss went out of town and gave me some ham.  I love free food.

After breakfast, I picked more cherry tomatoes from my plants that never die and watered everything.  I have a few seedlings coming up:  2 squash, 6 corn, 4 green beans.  Then there are the green onions, the sweet potatoes that will probably never grow, and marigolds that re-seeded from last year.  This weekend is the air show and it was fun to watch the planes fly overhead.  My house seemed to be in one of their flight paths.  Here is the re-fueling plane with helicopters. 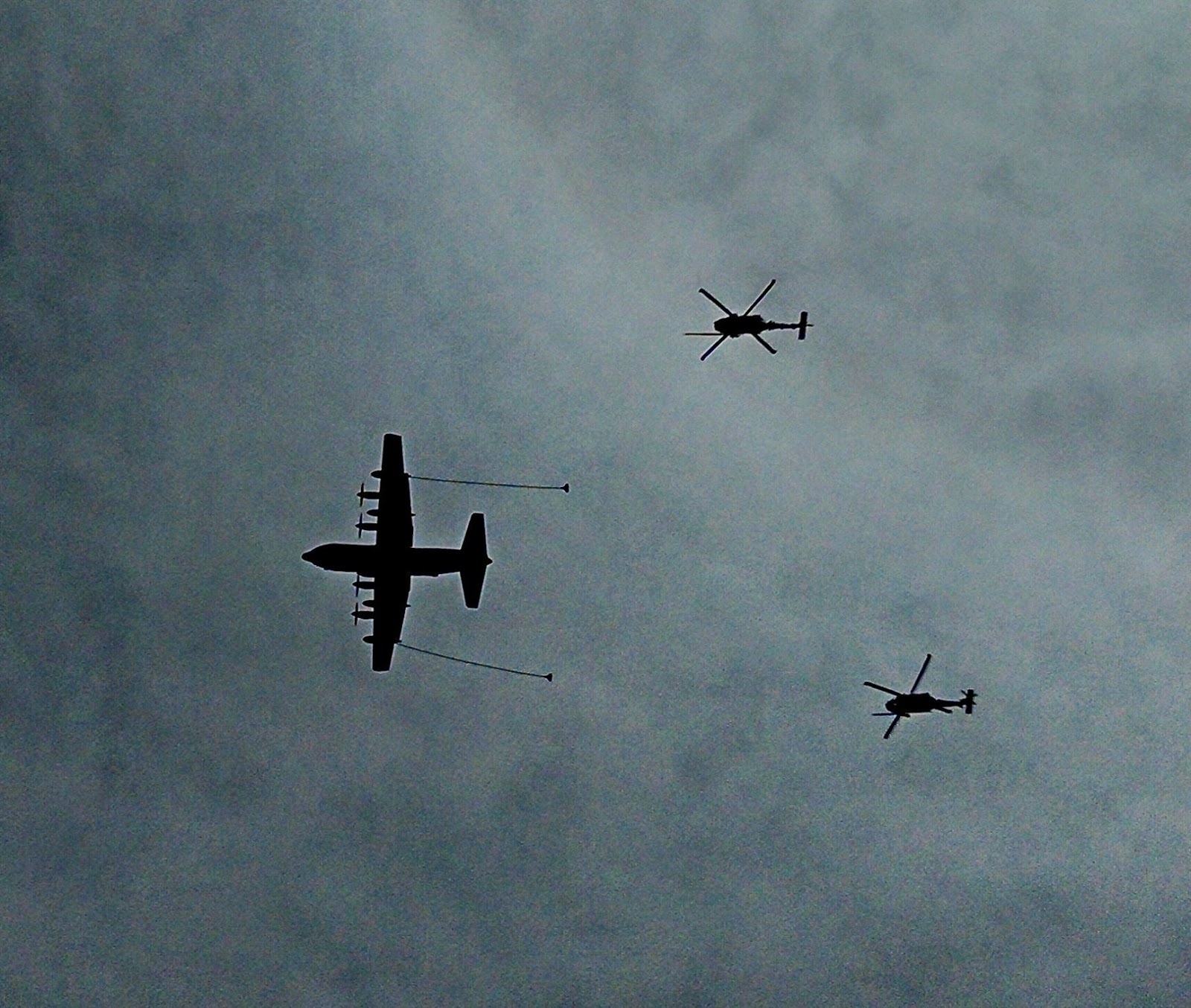 My mother called and asked me to bring a shovel when I visit her next weekend so that we can plant the grapefruit tree that she got for her birthday last week.  My shovel was propping up my quail stand so I got out the wood and power tools and screwed a crossbar to the front of the stand eliminating the need for the shovel.  Since I had the power tools out and I found a suitable piece of wood for my kitchen window shelf, that became my next project.  But first I finished watching a movie...or 2. 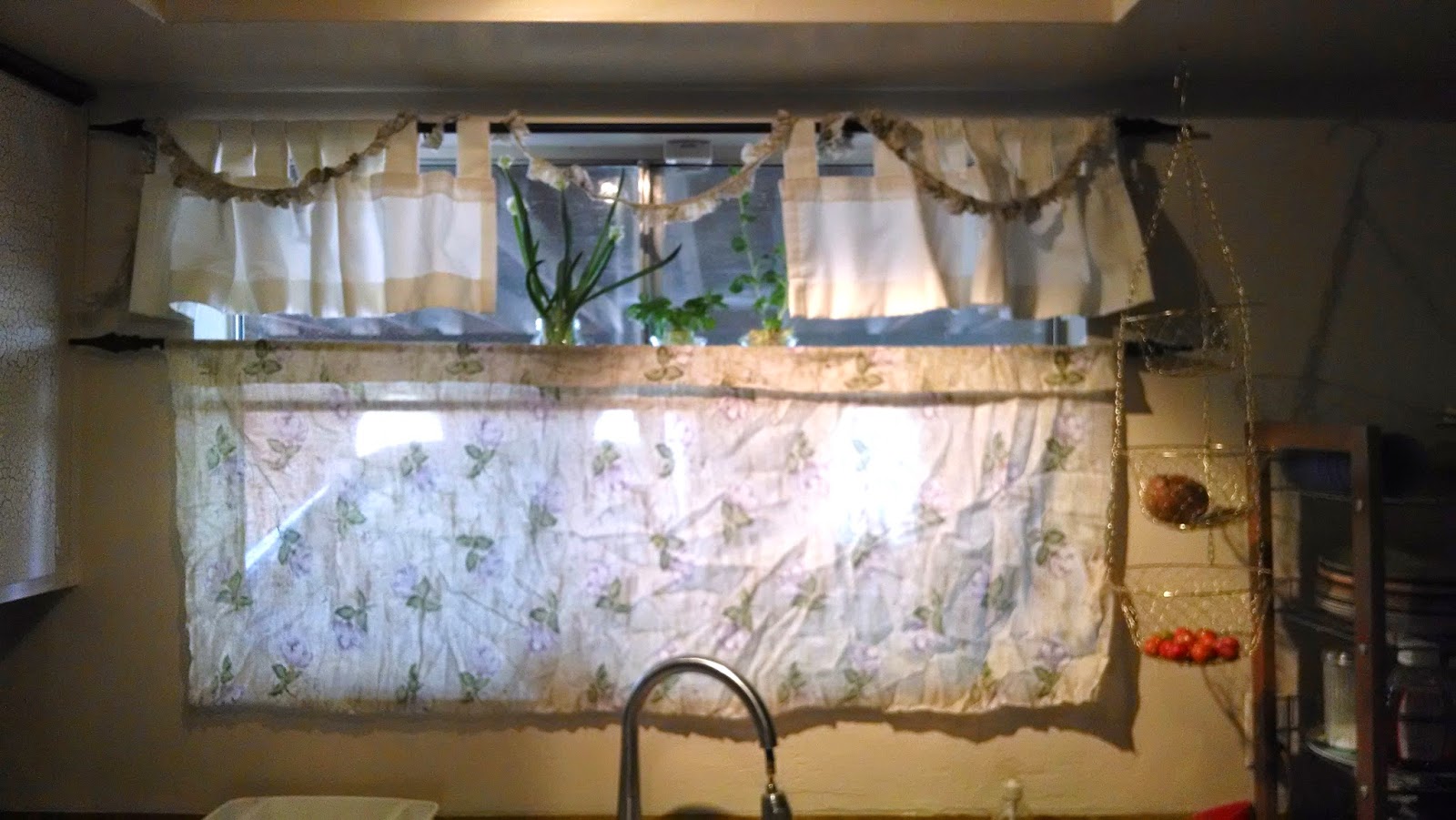 It doesn't look good yet but there is a shelf behind the curtain rod now.  My green onions and romaine that bolted are almost too tall for the shelf.  I want to lower the curtain around 4 inches so that the rod is even with the shelf.  I don't like the top curtains.  They came with the house.  I left them up though because the window is so dirty.

Next was cooking chicken in bulk for the week and finally, a nap.  After doing the dishes and having a bowl of ice cream, I fixed the curtain in my bathroom.  I brought a tension curtain rod from the shed out at my property (I love shopping in my own stuff for free) and cut a white towel to fit the window to block the sun.  Then the shear curtain went over that.  It looks better but it doesn't match anything in the bathroom because it is green and the rest of the bathroom is grey-blue-gold but that will change sometime soon whenever painting gets on the top of my list.
Posted by Daizy at 7:51 PM

That sounds like a thoroughly lovely time. Just the right amount of productive. Hilarious that you leave curtains up as window is dirty. We are one!!

If the eggs were green then you had a Dr. Seuss breakfast LOL!

I think you surely deserved that nap after all the stuff you did. Do you have the day off this Friday?

We have something in common - that nap and cooking chicken for the week. I hope your chicken is as good as mine!

Lizzie, and they are dirty on the outside so I'd actually have to go outside in public. My neighbors might find out someone lives next to them!

I do have this Friday off, Dave! I have been looking forward to it for months. I might actually be in a painting mood next weekend although I will be visiting my mother one day but that leaves 2 whole days for painting. My chicken turned out great although I don't think it was my doing. I just happened to get tender chicken. Sometimes it is really tough even though I cook it all the same way.