Another successful weekend!  I've decided that my happiness depends on low expectations.  That sounds terrible doesn't it?  I have a to-do list a mile long and every weekend is so short but if I pick just one thing on my list as a priority, then I am more likely to do it and I don't feel like a failure.

This weekend's 'one thing' was to buy my mother's new computer.  I looked up prices online and then narrowed my choice down to a basic computer from Best Buy.  On Saturday, I stopped by Best Buy which just happens to be on the way to my parents' house.  I walked in at 1pm and walked out at 1:15 with a new computer.  I wasn't expecting it to be that easy but I told the sales person what I was looking for and he pointed out this computer and it was the same computer that I had found online and it was cheaper. 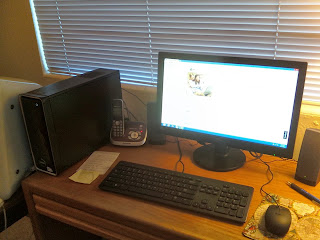 I set it up in my parents' office room.  The only problem that I had was where to plug everything in.  There are so many plugs now with telephones, modems, and even with a power strip, I had to use another extension cord to have enough outlets.  The operating system is Windows 8, which I dislike, but once it is set up my mother shouldn't have too much trouble navigating around.  The salesman told me that Windows 8.1 is coming out any day which will allow people to go back to the look of Windows 7.  I might do that.  We had to go buy some speakers at Big Lots.  They were only $8.  I had forgotten that speakers aren't included anymore.

So, my goal for the weekend was complete and that meant anything else that I got accomplished was a bonus.  I cooked my roast in the crock pot and then froze it in smaller portions.  It turned out well but I don't know how to season a roast.  I thought I put a lot of seasoning on it but I really couldn't taste it.  The dogs thought the extra pieces were fabulous.  I should figure out the per pound price of meat verses dog treats.  I think meat might be cheaper and better for them.

I worked on the yard more and bagged up 3 bags of trash.  It was in the upper 80's this weekend so it was hot during the day.  I've started taking the dogs for a walk again.  They love it but I can't say it is one of my favorite activities.  One of my dogs likes to go nuts when cars go by.  I'm always afraid he is going to get loose and chase one.

Other bonus chores:  4 loads of laundry and dying my hair.

Next weekend is open so far.  It will probably be either going to my property to get more stuff or buying more rock for the backyard.  But first I have to make it through 5 days of work.
Posted by Daizy at 8:54 PM

Not low expectations, just a little more manageable. I read somewhere that you should just cross out 50% of your list but that doesnt work for me as I dont put stuff ont he lsit unless it needs to be done!

Nice going on your PC. If you do some research before you go to the store, as I did before I bought my Windows 7 system back in early 2012, you can get in and out pretty fast, no more than 30 minutes.

What has made the plugs stuff so much more challenging is that many of them have those big adapter power packs near the prongs so you can't use all 6 outlets in the power strip. On the upside, some plugs have an outlet on the top of it so you can plug in a second device into the first plug. But between the electric and all the other cables connecting devices to each other you end up with a big tangled mess back there.

My friend has Windows 8 and I have found it awkward to use, making me glad I have Windows 7 which has been great.

When my ladyfriend uses her crockpot to cook a roast, she adds beef broth to season it. Not sure if you are doing that already.

Can we get a picture of your dyed hair? Is it purple now? LOL

Yes, Lizzie, the stuff on the list has its own way of fighting to the top. It really comes down to whichever is squeaking the loudest.

Exactly, Dave. Those big blocky plugs take up 2 or 3 outlets. That fills up a power strip fast. Windows 8 is very awkward. Every task had one or two extra steps added to it. I'm getting used to it now but the apps icons still confuse me so I try to stay in desktop mode as much as possible. For the roast, I did use one can of broth but I didn't have two so I added water. That probably didn't help it. My hair is now dark blonde. It's my Winter color.