Replacement TV Remote to the Rescue! 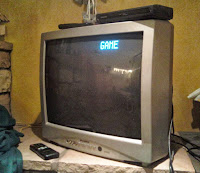 I finally got around to researching my TV remote.  Every time I would think of it at work I wouldn't have the TV brand and part number with me and I kept forgetting to look it up when I was home.  Last week, I wrote down the part number and did some searching.  First, I went to the Sylvania website.  I found my remote but it cost around $45 including shipping.  I could probably buy a used TV on craigslist with a remote for that price.  A little more searching and I found ReplacementRemotes.com.  For a refurbished remote control, I would only have to pay $9 plus $4 for shipping.  I decided to take a chance with a refurbished remote.  My package arrived today.  Excitedly, I put the batteries in and tested it on my TV.  It works!  I can switch to 'game' mode which is what I need for playing DVD's or the wii.  Now my TV is useful again instead of headed for a landfill.  This TV would have been really nice to have when my sister and her kids were visiting but I can only handle one problem at a time so it had to wait.  I am thrilled that this chore was successfully completed with only a little bit of time and money.  Not like a certain smoke detector which is on my bad list right now.

You would think replacing a smoke detector would be easy.  I thought it was a wired smoke detector because their were wires behind it but that was just a figment of my imagination.  My brain was sort of foggy as I ripped the wailing alarm off the wall for the third time in two weeks at an imaginable hour of the night.  The first time it happened, I changed the battery.  The second time it happened I vacuumed it.  The third time it happened I ripped out the battery and threw the lifeless shell on the kitchen counter to be dealt with later.  A month later, I went to the hardware store and tried to pick out a suitable replacement.  Turns out the one I bought is wired only with no battery back-up.  The last homeowners were using the smoke detector with the battery back-up only since it was not wired in.  All of those wires went to smoke detector back in the 70's but now that mess of wires is just scary.  I don't even want to mess with it.  I'm taking my smoke detector back to the store to exchange it for one with battery back-up like I had before and it will remain unconnected until I get an electrician to make sense of all those wires.  I have a couple of other things on the list for the electrician like fix the living room fan which runs on slow only and replacing the horrid and hot halogen track lights which are in the kitchen and dining area.  Replacing one bulb costs $7!  And there are 5 bulbs in each light!  Ok, so I could buy them in bulk and the cost would go down to $4.50 a piece but really, I'm just going to wait until all of the light bulbs burn out and then replace them with simple $20 ceiling lights which don't give off so much heat and that use regular bulbs.   That is on my 'future' list.  Just another thing I would like to fix before I rent this house out.
Posted by Daizy at 9:17 PM

AFter an old VCR died a few years ago, I picked up one at a garage sale for $5 with the plan to use my universal remote to get it to work. But I could not make that happen, so I had limited use of the VCR until......I remembered I had a remote from the same brand of VCR I owned back in the 1980s.

I had gotten the idea to try using that old remote after viewing a replacement remotes website like the one you posted a link to. It was a crude remote, lacking a number keypad and containing only VCR controls and a channel +/-, making on-screen programming clumsy (ahd to do it at the VCR itself, with difficulty). But the darned thing worked, so I was back in business, for a few years until the VCR died (and I never replaced it).

I love it when the solution is right in your own home. Who knows how many electronics are tossed out just because the remote is missing. I tried a universal remote, too, but it wouldn't switch it in to auxiliary mode which made it useless, until now.