Yesterday I went out to my rental house to work on the yard.  I inspected the place where the air conditioner condenser used to be before it was stolen and I thought of some ideas to secure the new one when it gets replaced.  This side of the house is really narrow so a gate from the house to the wall will work nicely.  I'm not sure how I will secure the gate to the house and wall or maybe I will dig some holes and fill them with concrete.  If the insurance company picks the bid from the fellow that I have used for my own house then he said he will help me put some anti-theft measures in place.  Actually, he would probably help me even if they don't pick his bid because he is a really helpful guy. 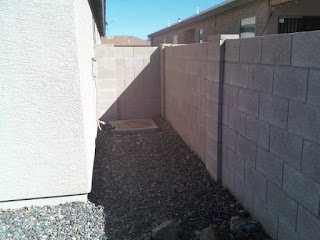 While cleaning out the brush and trash from the yard I found the A/C circuit breaker (I think that is what it is called) next to the fence that backs up to the high school softball field.  I think that maybe the thieves drove a truck on to the school property and hoisted the condenser over the back fence.  That could have been the reason that no one saw anything.  Bringing the thing out to the front of the house would be riskier.  The circuit breaker box has a place for a lock so it will definitely be getting a lock next time so it isn't so easy to shut off the electricity.  Hopefully a gate and a lock on the circuit box will be enough to deter them next time. 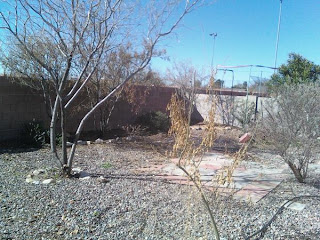 I spent about 4 hours trimming trees, pulling up the dead shrubs, picking up trash, trying to sort out the bark from the rocks, and tidying up.  I took out the drip system because no tenant has ever used it and their dogs just use it as a chew toy.  They don't care about my landscaping.  The shrubs that needed the drip system were dead anyway and everything that is still alive is drought resistant and has survived on its own.  I was hoping it would only take me one Saturday to fix the yard but it was too late to take the brush to the dump so I will have to do it next Saturday.

The house looks good.  As soon as the water gets turned on they can clean it and it should be ready to rent again.  The yard is going to look great when everything turns green again.  Too bad I won't see it.
Posted by Daizy at 8:14 AM