I thought I posted this last week.  Hmm...maybe I should check my blog more often.

I'm trying to post something twice a week but these days are just flying by.  The tiny foster dog that I had was re-claimed by her owner and went home on Friday.  The house felt too empty so I went down to the pound and picked up 2 more, a yorkie mix and a chow chow mix. 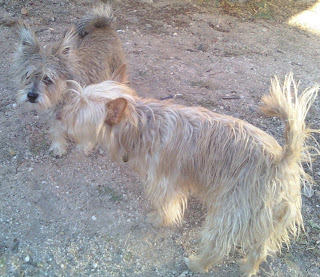 This is my dog on the right and the new foster dog on the left.  I couldn't pass up a little girl dog that looks so much like my own boy dog.  She was on the special needs list at the pound because she is older (she is only 5) and they said she had cloudy eyes.  Her eye problem turned out to be caused by a nasty tick which I removed and then I washed her face and she was all better. 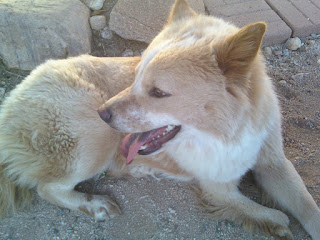 The second dog is a chow chow/ Australian shepherd mix, or something like that.  She is very fluffy.  She has a deformed paw so she was on the special needs list too.

Today was their spay appointments so I got up early and ended up losing the yorkie as I tried to load them both in the car.  There's nothing like a nice, frantic morning sprint down the middle of the street while chasing a dog.  She stopped to smell a shrub and I was able to grab her leash.  Then the vet didn't have our appointments scheduled so I was sent to a different location across town.  So much for being early.  I got to work at my normal time and had to leave an hour early to go pick them up.  I'm glad that's done.  Now they can go up for adoption.  Let's see how long it takes for these 2 to find new homes.  Both of them are very friendly.  I don't think it will take long.
Posted by Daizy at 8:42 PM

If you were here in New York, that pooch better know how to do the doggie paddle LOL!

It's a mess here, daizy,. No power here but I am at a friend's place where there is power. I brought my PC with me, too.

Glad to hear you are alright, Dave. The pictures on the news sure are awful. Any closer to electricity?

Still no power at my place, I was just there to pick up a few things. My dad and my best friend (the one I told you about who bought an apartment last year) got their power restored after losing it Sunday night. My whole co-op complex which includes many elderly, elevator-dependent residents, is without power.

But my monthly dividends came in and online payment went through so the internet is just fine.

Daizy, I am now back home. I got power back around 12 noon.

Hooray for electricity! I am amazed at how dependent we are on it. I remember the power going out after a bad storm in Yuma. No A/C and 115 degrees. That was miserable. I heard the subways are moving again. I hope you have enough provisions so that you don't have to go out too much. Good thing you don't have to go to a job. Do you have any reason to go out, I mean, besides helping other people. Hopefully you aren't standing in gas lines.

I went food shopping a week ago Wednesday so I am well stocked with food for several more days. A mini-mart a few blocks away has been open the whole time so I can get milk there. Some area traffic lights are working but others are not, so going to the supermarket would be a task even if it is open.

Some subways are running again but because most go through tunnels into Manhattan (and most of those are flooded), it is tough to get into Manhattan from Brooklyn or Queens.

Plenty of gas in my car (3/4 of a tank) but nowhere to go, thankfully. My local gas station has no power but on a walking tour of the neighborhood I took this morning I saw a worker there changing a tire. My local bank has power but the ATM is down (could be for local maintenance, not sure).

My ladyfriend took the bus to work (free ride today) today because she is low on gas. A local cop told me the time limits in the municipal parking lot she is in are waived so she doesn't have to move the car until Monday morning. Her cable TV finally came back, too. She did not lose power, phone, or internet at all so I crashed there for a few days (saving my frozen foods).