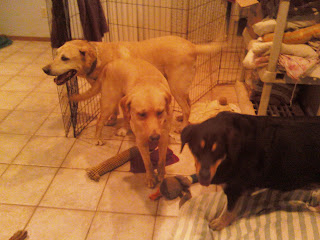 I told a coworker that I would watch his dogs while he went on vacation.  I thought he was going to be gone 5 days and I was only getting 1 dog.  Turns out I got 2 dogs and he will be gone for 11 days.  Things are a little crowded around here.

I left the sliding door open this morning so that I could go back to sleep and wouldn't have to hear the dog door clang every time one went through.  When I got up later there must have been 50 flies in my room and bathroom.  I forgot it was fly season.  The ceiling fan kept the flies from flying much.  They mostly just sat on the floor and walls until I disturbed them.  Luckily, I had some fly paper left over and I hung it from the ceiling and in the door way.  Almost all of the flies are dead now.  It worked pretty well.  I'll try to remember not to keep the door open tomorrow.

I'm still getting over my cold so I stayed in bed and watched movies most of the day.  I watched Sgt. Pepper's Lonely Hearts Club Band, the movie.  I had never seen it.  It was nothing like I thought it would be.  No wonder it flopped.  Yikes.  It was fun to see the stars when they were younger though.
Posted by Daizy at 9:42 PM

He is so lucky that you didn't get them adopted, if he only knew it!

I saw that film when i was at school, director must have been on drugs. I do remember some bloke with a silver hammer killing people off with a bang on the head, maybe.

Drugs for sure. Anyone who thought they were making a wonderful movie must have been sad when they got sober and saw the final picture. It was educational in a historical sense though.